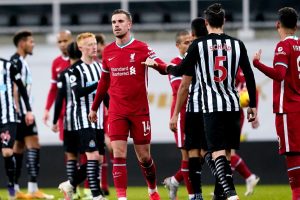 There is no need for any panic from Liverpool.

The doubts have been growing after back-to-back draws against West Brom and Newcastle.

But I won't change my mind – if you finish above Liverpool this season and don't win the league then you're bang out of luck.

It's like the old days when I first got in the Arsenal team, if you finish above Liverpool then you win the league.

I can't see anybody doing it, though.

Jurgen Klopp's side are not used to having bad spells after their incredible form over the last two years.

But here they are in a little lull and they're still top of the Premier League. That's not bad is it?

They're having a lull and they're not losing.

Instead, they have added two points to their tally for the end of the season.

That is the way I look at it.

Yes, West Brom and Newcastle are two teams you would expect them to beat.

But welcome to the world of being the champions.

It has been a long time since Liverpool have gone into a season as title holders.

I know how hard it is to win the league, I've been lucky enough to do it twice.

But it is very difficult to win them back-to-back and that is what Liverpool are finding out this season.

Why? Because everyone ups their game against you even more.

I know they're seen as points dropped but this is what Liverpool need to get used to, they're champions so Newcastle were going to run themselves into the ground to beat the champions.

People pick their games up for the champions and that is why it is so hard to go back to back because you have to be up for it as the other team will treat it as their cup final.

But if Liverpool don't play well, they still don't lose.

You see some teams and go, 'They were poor today' and they've lost. That rarely happens to Klopp's side.

I know people are saying Liverpool have dropped four points against teams they should beat but I don't see a lot wrong.

It's not a time to panic. They're top of the league. I'd be shocked if anyone finishes above Liverpool, including Man United.

They've had Virgil van Dijk missing but they've still been tight at the back. They've not been in 4-3s and had to score four to win a match.

They've done great to deal with the injury problems.

Over the last month, they've beaten a flying Tottenham side, a flying Wolves side, throw in the win over Crystal Palace as well.

Yes they've drawn with Fulham, West Brom and Newcastle but these could be the points that win you the title at the end of the season.

Sometimes you see sides who chase games when it's not going for them and they end up losing.

That doesn't seem to happen to this Liverpool team.

Maybe against West Brom they got a bit complacent because I watched the first half and if it was a boxing match the referee would have waved it off.

They might have got into a mentality of 'We are 1-0 up, we've won this because all West Brom want to do is keep the score down'.

That can be difficult to deal with, while they had the chances to beat Newcastle.

But if you don't score against them early it can be a very hard 90 minutes because of the way they set up.

Southampton is a hard game on Monday but the Saints will come out at them and that will suit Liverpool, too.

I would be sitting very comfortably if I was Klopp.

They've become champions in 2020 and at the turn of the year they're top of the table. You can't ask for much more.

Football should continue – it's a massive to mental health

Football should continue for me despite the rising coronavirus numbers across the country.

First of all, it is about the health of the nation. I understand that.

But the Premier League have all these protocols in place to keep everyone as safe as possible.

I don't want to sound selfish but the football being live on TV is keeping people happy.

It plays a massive part in the mental health of so many.

When we were in the first lockdown and there was no live football it was hard.

I know everyone is not a football fan but so many are.

I really hope it continues, I don't mean that in a selfish way but the players are looked after and are tested all the time.

These players are helping the country and giving us some feel-good factor.

Arsenal have found confidence again – and it will tell

Arsenal now have two wins on the bounce – how many are they off Liverpool? They can catch them!

They are back. If they win against West Brom they will be hunting down Liverpool!

I'm joking, of course I am but I am pleased to see them back to winning.

They needed a little bit of luck and they got it against Chelsea with the penalty and then Mikel Arteta put some youngsters in with legs.

Sometimes when you bring players in they have something to prove and they want to do it for the club.

I'm really pleased for Arteta to see them get those wins over Chelsea and Brighton.

They seem to have that back now.