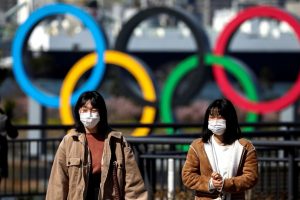 The delayed 2020 Olympics will go ahead as planned in Tokyo this summer – despite a surge in coronavirus cases in Japan.

The Olympics are due to begin on July 23, with the Paralympics following a month later from August 24, having been postponed for 12 months due to the pandemic.

But cases of Covid-19 have risen sharply in Japan, with Tokyo reporting over 1,000 daily infections for the first time.

Tokyo governor Yuriko Koike has warned that the number of infections could now 'explode' due to the onset of the new strain of the virus.

There were a record 1,337 cases recorded in Tokyo on New Year's Eve, with 783 new infections announced on Friday, with Japan recording 239,041 coronavirus cases and 3,337 deaths during the pandemic. The International Olympic Committee has seen the cost of the rescheduled games rise by £2billion, due to the measures taken in Tokyo to limit the spread of Covid-19.

The Games are expected to become the most expensive in history, but organisers are determined they will go ahead as planned this summer without any further delay. Japan prime minister Yoshihide Suga said the "Games will be held this summer" and would be "safe and secure", adding that the event could serve as a "symbol of global solidarity".

It remains to be seen if spectators will be allowed to attend the Games, with a recent poll conducted in Tokyo revealing that the majority of the general public were against the event taking place.