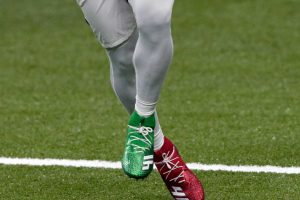 New Orleans Saints running back Alvin Kamara has been fined $5,000 by the NFL for wearing cleats that violated the league's uniform policy on Christmas Day, according to NFL Network's Tom Pelissero.

With one red shoe and one green, Kamara had six rushing touchdowns, tying an NFL record set in 1929 and finishing with a career-high of 155 yards rushing to help the Saints defeat the Minnesota Vikings 52-33.

Kamara shared his thoughts after the game, knowing that a fine was likely in his future.

"Oh, they’re probably going to fine me," Kamara said during a postgame interview. "If they fine me, I'll just match it and send it to charity. The Grinch always tried to steal Christmas."

The league allowed Kamara to wear the cleats for the entirety of the game since they did not pose a safety risk or any branding issues, unlike a game between the Denver Broncos and the Cleveland Browns last year where Browns receivers Odell Beckham Jr. and Jarvis Landry were asked at halftime by the league to change their decorative, non-conforming shoes or be prohibited to play in the second half.

Kamara and the Saints head into Week 17 No. 1 in the NFC South. They play the Carolina Panthers on Sunday at Bank of America Stadium.