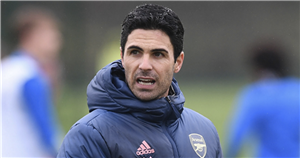 The Spaniard stated before the Premier League clash against West Brom that the club will focus on outgoing deals, but their hand could be forced by La Liga giants Real Madrid.

Dani Ceballos initially joined Arsenal on a season-long loan back in July of 2019, and after 37 appearances in all competitions it was agreed that he would return for the 2020/21 campaign.

However, Ceballos has not been a guaranteed starter under Arteta this time out, completing 90 minutes on only six occasions across their 16 Premier League fixtures.

Calcio Mercato have reported that Zinedine Zidane is monitoring the situation as the club question his importance at Arsenal amid their own struggles in Spain, which could leave Arteta short.

The partnership of Thomas Partey and Granit Xhaka appears to be a postive one, while Mohamed Elneny has battled to save his career at the Emirates with a series of impressive outings.

The manager said of his transfer plans earlier in the week: "We have a large squad and we knew that. A lot of things that should have happened in the summer, we cannot accomplish for different reasons.

"There are some players that are going to go on loan and going to leave and that is the priority at the moment.

“We cannot sustain the numbers that we have in certain positions and we are looking to do that, and then we will see if we have the right opportunity in the positions where we need some more help."

Arsenal legend Kevin Campbell stated last week that although the Spaniard has been liked with a permanent move to north London, he might not have done enough to justify it.

In a chat with Football Insider, he said: "I do not think he has done enough to justify a permanent move.

"At the back end of last season he was playing really well and when Arsenal went back in for him I thought he was really going to kick on but everything has come crashing down at the same time.

"At times he has looked OK when he has come on but the team has not been good enough in the centre of the park this season. We need people with legs in there, it is not just about being good on the ball.

"You have to close down and dominate your opponent and he does not do that enough."