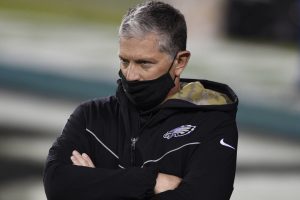 Doug Pederson said this week he expects to be the Eagles coach in 2021, and he’ll have at least one key spot on his coaching staff to fill.

Defensive coordinator Jim Schwartz intends to allow his contract to expire after Sunday’s finale against Washington and take a year off from coaching, per sources.

Schwartz, 54, has told those close to them that he will contemplate retirement after a 32-year coaching career, including 28 in the NFL and a Super Bowl win three years ago with the Eagles.

One of the NFL’s most respected defensive coaches, Schwartz is still thought highly of by the Eagles, who previously approached him about an extension. But after dealing with multiple recent hip and eye surgeries, Schwartz believes it’s the right time for him to step away from the daily grind, at least in the short term, per sources.

Schwartz previously spent five seasons as the Lions’ head coach from 2009-2013, compiling a 29-51 record with a playoff trip in 2011. He received head coaching interest as recently as last year, when he interviewed for the Browns job that went to Kevin Stefanski.

The Eagles have stumbled to a 4-10-1 record this season and were eliminated from playoff contention with last week’s loss at Dallas.

This week, Schwartz said the Eagles must have a “no-hat rule” Sunday — denying Washington a chance to celebrate the NFC East title with a win in Philadelphia. It turns out that’ll be Schwartz’s last game with the Eagles.