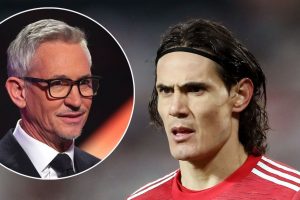 Gary Lineker has reacted to the fine and ban handed to Manchester United forward Edinson Cavani.

The Uruguayan has pleaded guilty to using insulting and/or improper words after being charged of doing so by the Football Association following a message he posted on Instagram.

After scoring the winning goal against Southampton on November 29, the post in question was removed by the player when it was pointed out that the term could be seen as offensive outside of South America.

Cavani will also take part in a face-to-face education programme after he stated that he intended the message to be an affectionate greeting to a friend.

Lineker has since noted that although the ban and fine were an ‘excess punishment’ the manor in which both Cavani and United have accepted them has been exemplary.

After Piers Morgan wrote: “Ridiculous that @ECavaniOfficial has been banned for using a term to a friend that's considered inoffensive in his own country.

“No racist intent, no offence felt by recipient. Dumb overreaction by the FA. A quiet word about language sensitivities would have sufficed.”

Lineker replied: "Agreed, but both @ECavaniOfficial and @ManUtd have handled the excess punishment with dignity.”

Cavani has said of the decision: "It was intended as an affectionate greeting to a friend, thanking him for his congratulations after the game.

"The last thing I wanted to do was cause offence to anyone.

"I am completely opposed to racism and deleted the message as soon as it was explained that it can be interpreted differently."

With United adding: "Despite his honest belief that he was simply sending an affectionate thank you in response to a congratulatory message from a close friend, he chose not to contest the charge out of respect for, and solidarity with, the FA and the fight against racism in football.

"The club trusts that the independent regulatory commission will make it clear in its written reasons that Edinson Cavani is not a racist, nor was there any racist intent in relation to his post."

Cavani will now miss United’s Premier League clash against Aston Villa as well as the EFL Cup semi-final against Manchester City and FA Cup third round clash against Watford.