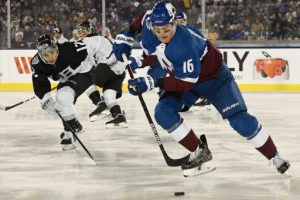 Here’s a look back at The Denver Post’s top 10 most popular Colorado Avalanche stories of 2020, as determined by our readers.

Published Dec. 13, 2020. The architect behind the two Colorado Avalanche Stanley Cup championship teams has died. Pierre Lacroix passed away Sunday from complications from COVID-19, per Quebec media reports. He was 72.

Published July 18, 2020. Jared Bednar was as animated as he has probably ever been in his four years as Avalanche head coach, in Day 5 of the training camp 2.0 at Pepsi Center.

Bednar stopped an end-to-end 5-on-5 and unleashed an obscenity-laced tirade that included his concern about checking, the limited practices remaining before the Avs’ Aug. 2 opener in the 24-team playoffs and something about “(expletive) golfing” if things don’t go well in Edmonton, the Western Conference hub city.

Published Aug. 18, 2020. Nineteen seconds into the third period of Game 4 against the Coyotes, Makar scooped an open puck at his blue line, reached top-speed, slipped Arizona defenseman Alex Goligoski with silly stick work and backhanded the puck over the right pad of goalie Antti Raanta.

Several minutes later, with the Avs up 6-1, Nathan Mackinnon slammed Coyotes forward Christian Fischer to the ice in a skirmish ignited by Arizona forward Lawson Crouse cross-checking Makar face-first into the boards.

Published Aug. 11, 2020. Altitude announced in August it waived its exclusive broadcasting rights for Avalanche and Nuggets first-round playoff games, thus all games will be available locally on national platforms.

Published Aug. 28, 2020. The NHL suspended play for two days to protest racial injustice in August. And fans were eager to see the revamped second-round playoff schedule.

Published Aug. 3, 2020. Comcast violated blackout rules in carrying the Avalanche’s first seeding game on its NHL Center Ice platform Sunday. The game against the St. Louis Blues was also shown on the NBC Sports app, which was subject to black out as well.

Published Feb. 16, 2020. “It’s not that people were being dumb and leaving too late, it’s that this place has absolutely no clue how to handle a crowd and event of this magnitude,” says one fan.

Published Jan. 15, 2020. “They’re doing a better job of cheating on it than we are,” Bednar said. “We don’t feel like the linesmen were doing a good enough job (Tuesday), sort of holding (the respective teams) accountable to make it a level playing field on the faceoffs.”

Published Feb. 16, 2020. The statement was emailed to The Denver Post after a request was made to comment on Saturday’s traffic jams, long concession/bathroom lines, parking issues and other problems associated with the NHL Stadium Series event at Falcon Stadium.

1. NBC to black out Avalanche territory when return-to-play begins Sunday

Published July 31, 2020. “We are exclusive for all three of these games,” Altitude executive vice president Kenny Miller said in a text message. “NBCSN will black out Avalanche territory.”