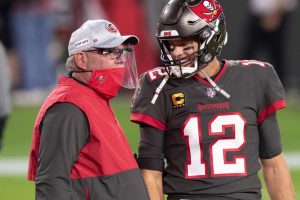 ﻿Tom Brady﻿’s offseason odyssey to Tampa Bay has been regarded by some as the biggest free-agent signing in NFL chronicle, larger even than ﻿Reggie White﻿ to Green Bay or ﻿Peyton Manning﻿ to Denver.

But has it lived up to the hype?

“Totally exceeded,” Arians said Friday – via team transcript — when asked if Brady had met or exceeded his expectations for this season. “With having such a limited practice, we went to New Orleans [in Week 1] still learning words. When the quarterback calls a play, he should have a picture in his head. I don’t think that happened until November – just continuing to learn what words meant and what concepts meant, and then adjusting concepts as we went along. A guy might have a three or four-way go on a route [but now] we eliminated it to two. Things like that as we just kept evolving. I think right now when he calls a play, the picture is in his head and he’s really, really playing well. He’s exceeded it. His leadership is beyond anything I’ve ever seen. Peyton Manning is the only thing close.”

Brady’s signing with the Buccaneers was a franchise-altering event. It brought with it immediate legitimacy for the team’s aspirations and immediate media and fan attention seldom, if ever, seen before for the Buccaneers.

A mercurial season has played out with the Buccaneers at times looking like the best team in the NFC and at others coming out on the wrong end of horrendous losses. But the overall results so far are difficult to argue with.

And, perhaps most importantly, Brady has led the Bucs back to the playoffs for the first time since 2007.

It’s an illustration of Brady’s leadership, which Arians also spoke swimmingly of.

“Just the way he handles young players and veteran players,” Arians said. “He’s another coach on the field talking to Gronk (Rob Gronkowski) about how he’s running his routes [and] talking to Scotty [Miller] how he’s running his routes. [Talking to] anybody about where [he] expects to see you [and] protections with the offensive lineman. It’s a never-ending thing with him – the perfectionist – to get everything right in practice. Also, his calmness on the sideline in games when we’re not winning, [saying], ‘We’re going to win.’ Those type of things. You put those in a bottle and you make a bunch of money.”