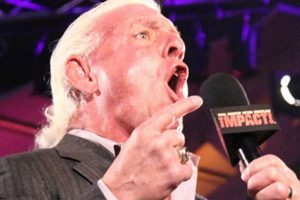 Ric Flair began trending on Twitter after an x-rated picture surfaced on the social media platform.

The picture showed a man performing a sex act on a train, and many fans joked it was the The Nature Boy himself.

One account famous for posting content regarding WWE in the 90s, wrote: “Ric Flair out here still living his best life.”

Another added: “Ric Flair wilding” while this fan howled: “Scrolling the reactions to #RicFlair trending has me in absolute tears.”

The two-time WWE Hall of Famer has since tweeted a response denying he is in the photo in typical Ric Flair fashion.

He said: “This Picture Is As Real As That Other One Floating Around. The Nature Boy Doesn’t Ride Trains! WOOOOO WOOOOO!”

He also told TMZ Sports that he is not the man in the photo that sent Twitter into meltdown.

The male in the picture is unidentified.

The ‘Flair picture’ comes as former WWE star Kurt Angle this week claimed The Nature Boy saved his wrestling career in the late 90s – by telling him to go to WWE instead of WCW.

The Olympic gold medallist has previously spoken about asking Flair for advice on which promotion to join when they were both pursuing him.

Flair told him to join Vince McMahon’s company, as he would be better utilised.

Speaking on his podcast, The Kurt Angle Show, Angle said: "'Oh God, Ric brings it up all the time. He actually rubs it in my face: 'Hey, I saved your career by going to WWF instead of WCW.'

"But Ric was right. I think if I went to WCW, they probably wouldn’t have utilized me like WWE did. I’m very grateful for Ric’s advice. He directed me in the right direction."

Speaking of Ric Flair and the WWE, he requested his release with the company which was granted earlier this month.

It didn’t take long for Flair to get back inside the squared circle as on August 14 at Triplemanía XXIX, he made his Lucha Libre AAA Worldwide (AAA) debut by accompanying Andrade "El Ídolo", daughter Charlotte’s real-life fiancé, to ringside during his match against AAA Mega Champion Kenny Omega.

Flair would later get involved in the match by chopping Omega and applying the Figure Four leglock to Omega's second Konnan.