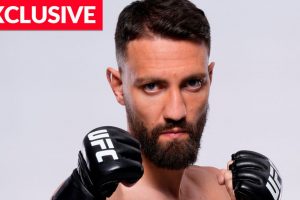 The Afghan prospect who also takes pride in representing the UK having moved here as a refugee with his mother and brothers at the age of five, has won all of his 13 professional fights including two in the UFC since his Contender Series triumph.

Despite calling for a ranking shot after beating two solid performers in Trevin Jones and Tony Gravely the 27-year-old, nicknamed the Snow Leopard, is hoping that beating up-and-comer Mendonca will bring a different kind of respect.

Speaking exclusively to Daily Star Sport during fight week in Las Vegas, Basharat said: "I wanted to fight early in the year and ideally someone high up in the rankings but these fights didn't happen.

"It's about getting that experience, I still have a lot to learn – and when the fight got offered I knew it was a tough opponent and a worthy test."

Keen to fight early in 2023 with Ramadan taking place between March 22 and April 21, Basharat added: "I didn't want to wait because if I didn't get a fight before Ramadan then I'm waiting 10 months for a fight where I'm fully in shape and not injured."

Which UFC star will have the best 2023? Tell us in the comments section below.

Fighting on the undercard of Sean Strickland's late notice light-heavyweight clash against Nassourdine Imavov, Basharat hopes that agreeing to a fight against a fellow unbeaten prospect will boost his status in the promotion.

Basharat continued: "That's exactly how I see it, that's the exact mindset I have going into this fight. On paper it's his debut in the UFC but I know just how good he is and I'm looking forward to the challenge.

"I hope I get the credit for this, I don't know if people will give me the credit, because I've been taking out the hitters in the division in my debut and second fight against big punchers."

Basharat has a professional record of 13-0 having impressed in the UFC after wins in UCMMA, FightStar and Oktagon among others.

Mendonca, a 23-year-old Brazilian, earned his UFC contract with a Contender Series win over Ashiek Ajim back in September, having won each of his preceding nine professional bouts.

Basharat added: "You don't often see unbeaten fights in MMA, not as often as in boxing, but you know the saying, someone's 0 has to go.

"I got into fights with gameplans but without one particular rule. I think one of the reasons I haven't got respect is not having a finish yet. But it's not for lack of damage, all these guys at the highest level are hard to finish."

Basharat will see a ranking fight as non-negotiable should he dispatch of the dangerous Mendonca at the UFC Apex, with eyes on the top of the division.

He concluded: "Yeah, no questions about it. Who else is unranked and high up that I haven't fought, even after this fight I wouldn't be mad. Give me a ranking or a ranked guy so I can put by stamp on the division."

Watch Javid Basharat take on Mateus Mendonca at UFC FIGHT NIGHT: STRICKLAND vs IMAVOV this Saturday, January 14. The prelims will be streamed live on UFC Fight Pass from 9PM and the main card will be broadcast live on BT Sport 1 from 10PM.