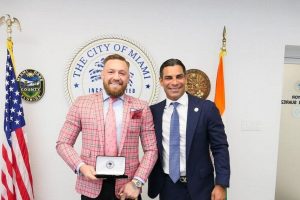 UFC star Conor McGregor has been handed the keys to Miami, posting images from the ceremony on social media.

The combat legend, who is recovering from his broken leg sustained in the trilogy fight against Dustin Poirier, received a lavish ceremony in which he had the honour bestowed upon him by the city’s mayor Francis Suarez.

The Irishman has been touring the United States with his family and was delighted to receive the award in Miami.

McGregor took to Instagram to reveal the news, and beamed with pride while holding the gong alongside Suarez.

The 'Notorious' social media caption read: “The Mac with The Key to The City of Miami!"

“Thank you Mayor Suarez for bestowing this great honour upon me and with my family present to witness.

“A very proud moment for me in my life. Thank you! Your hospitality and care for my family and team will be forever remembered.

“God Bless you and this great city! May the spirit of Miami live within us all.”

He also posted a sweet snap with his fiancée Dee Devlin and youngest child Rian McGregor and showed off his award to his elder daughter Croia and son Cnnor Jack McGregor Jr.

The 33-year-old is now back walking and assisted by a cane after suffering a freak injury against Poirier in their fight at UFC 264 on July 10.

And since increasing his mobility, he has taken to travelling around America with his fiancée and their three children.

Can Conor McGregor make a successful UFC comeback? Let us know in the comments section.

He first visited New York, where he attended the MTV Video Music Awards and clashed with musician Machine Gun Kelly, but has since said he would be happy for the singer and his girlfriend Megan Fox to attend his next fight.

After his appearance at the show, which the fighter claims he attended against doctors' orders, he travelled to Chicago before jetting off to Miami.

McGregor made headlines again, for a lighter topic, in Chicago after a disastrous first pitch at a Cubs game that went viral due to his misguided throw.

YouTuber Jake Paul has been making waves in the boxing ring and is currently in talks with Tommy Fury over a December date, but he also expects to face McGregor in a boxing ring down the line.

Should he do so McGregor, renowned MMA coach Javier Mendez is confident Paul would be the favourite going into the fight.

“Jake has got so many advantages on Conor,” Mendez said in an interview with Betway Insider.

“Size being one of the big major ones, and the fact that he’s been boxing for three-plus years with really good boxing professionals that know what they’re doing. So, no, he shouldn’t have to fear Conor whatsoever.

"Against Conor, absolutely he has a chance. Looking at the two, Jake’s got big advantages in size and power. Yes, he doesn’t have fight experience, but he’s been strictly just boxing for a long time now. Conor’s not been strictly boxing.”