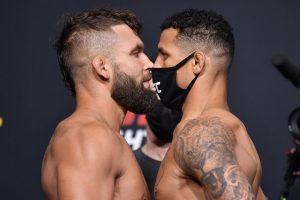 The UFC Vegas 24 card lost its co-main event fight just hours from the start of the event when Drakkar Klose confirmed he had suffered a bizarre injury.

The UFC announced at the start of the broadcast on Sunday that Klose has been shut down by medical staff as a result of an unexplained injury.

Klose later confirmed in a statement he had suffered an injury following opponent Jeremy Stephens’ shove to his chest during the weigh-ins.

Tonight’s Jeremy Stephens x Drakkar Klose fight has been canceled, per the broadcast.

Klose suffered an injury as a result of this push at yesterday’s official weigh-ins, per sources. Specific injury details not disclosed at this time. pic.twitter.com/ImbpMQxHur

Klose posted his lengthy statement on Twitter, claiming he had suffered injury complications as a result of the strike to his chest.

He said he felt his hand go numb and his neck tightened up as he rehydrated and prepared during the final 24 hours before the fight.

UFC: Francis Ngannou has disposed of Stipe Miocic with frightening ease to be crowned the new heavyweight champion….

UFC: Francis Ngannou has disposed of Stipe Miocic with frightening ease to be crowned the new heavyweight champion.

He also said he experienced a migraine.

He said the decision not to compete was made by the UFC’s medical team.

mmafighting.com is reporting the UFC is attempting to organise a showdown between Stephens and Klose in coming months.