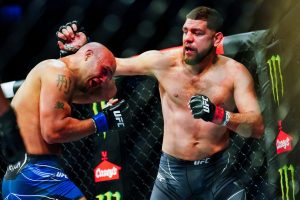 Dana White has heaped praise on Nick Diaz despite the UFC legend suffering defeat in his comeback fight.

Diaz, 38, returned to the octagon for the first time in more than six years at UFC 266 to take on Robbie Lawler in a rematch some 17 years in the making.

Diaz had won the previous bout in 2003 but this time around it was Lawler, 39, who prevailed via a third round TKO.

Prior to the fight, Diaz had concerned fans with some bizarre comments, claiming he's never enjoyed fighting and didn't understand why he was fighting his former rival, but despite inevitable rustiness from such a long hiatus White was left impressed. “I don’t know what I was expecting. You never know what to get with the (Diaz) brothers, but let me tell you what — with a five-year layoff, I thought he looked unbelievable.

"And I don’t know if you guys saw Robbie after the fight, but Robbie had freaking knots and lumps all over him. Those two went to war.

"I thought Robbie was just going to go out there and buzz-saw through him — and that was not the case.”

Should Nick Diaz fight again? Let us know in the comments section. It remains to be seen whether Diaz, who now has a fight record of 26-10-2, will pursue another bout, with White claiming he'd been not given indication as to whether his return was a one-off.

“I honestly don’t know the answer to that question, but he looked damn good.

"That kid’s got a massive heart, he’s obviously super talented fighter, and yeah, I was impressed.”

Sure enough, Diaz, the older brother of Nate, made little attempt to clarify his future after the fight.

He told UFC commentator Daniel Cormier: “I’m glad I at least put on a show.

“I knew I had it coming, Old Rob. I had a lot of stress coming into this one, especially being off for a long time.

"I don’t have no excuses. I had a long time off and I knew I had it coming.

“It was just a bum wrap. But no excuses. I had it coming. He was in great shape.”