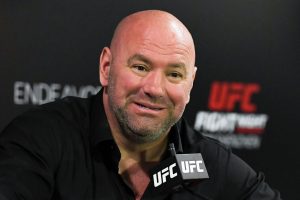 UFC president Dana White says boxers are all "overpaid" in response to criticism that he doesn't pay his fighters enough money to compete.

Speaking on a recent episode of the Pivot Podcast, White, 52, defended UFC's business model, insisting that it's far more sustainable, and fairer, than models used by most boxing organisations.

"One of the big problems with boxing is that all those f****** guys are overpaid, and every time they put on a fight, it’s a going-out-of-business sale," White said. "We’re just trying to get as much f****** money as we can from you guys, and then we’re out of here. We’ll see you in three years. You can’t build a league like that.

"You can’t build a sport [like that]. You can’t have 750 fighters under contract, making money, feeding their families every year, with that kind of mentality. It doesn’t work. You have to run a business," he added.

White has been butting heads with YouTuber-turned-boxer Jake Paul on social media in recent months, with the Problem Child even likening the UFC chief to a "drug dealer".

Who is the most overpaid boxer in the world? Let us know what you think in the comments section. Paul, who has five professional boxing wins under his belt, has reportedly been angling for a move to UFC, though White admitted he'd be reluctant to give the youngster a chance unless he could prove he was a worthy fighter.

"At the end of the day, the kid wants to fight here. I would never say never," White said.

"I don't know. I look at it sometimes and it's kind of intriguing, but it goes against what I do. I really do bring the best of the best in. And I've tried to do a couple of those celebrity things with a couple of WWE guys and some worked, some didn't, but I wouldn't say no.

He added: "[Although] I did Mayweather-McGregor when I said I would never do it, so who knows."