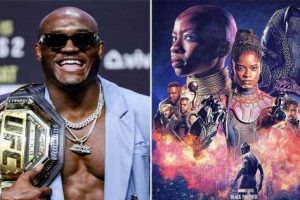 The welterweight champion is currently preparing for his sixth title defence against Leon Edwards at UFC 278 in August. Yet the 35-year-old will appear in ‘Black Panther: Wakanda Forever’ on the big screen just over two months after his clash in the octagon.

The highly-anticipated sequel is due to premiere on November 11 and will feature the stellar cast from the original, continuing the story on after the tragic death of lead actor Chadwick Boseman in 2020. And MMA fans are in for a shock after the 20-1 fighter landed his first role in a film.

It is still unknown which character the Nigerian-American will play and the extent of his role in the film. Though Usman, who previously posted an edited picture of himself as the iconic superhero on Instagram, is known to be a huge fan of the original film.

He will be hoping the bright lights of Hollywood will not get in the way of glory in his rematch with Edwards. The ‘Nigerian Nightmare’ defeated the Jamaican-born Brit back in December 2015 by unanimous decision.

Usman’s most recent win came against Colby Covington last November where he also scored a decision victory, though it wasn’t quite the superhuman display fans were expecting following their previous battle. Usman had obliterated the controversial American in 2019’s bitter grudge match with a brutal TKO.