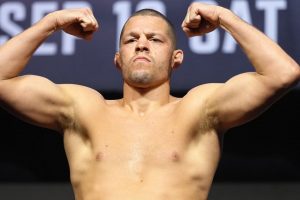 UFC 279 star Nate Diaz and brother Nick Diaz once continued their bitter rivalry with fellow UFC star Joe Riggs after being taken to the hospital post-fight – leading to Riggs having a very unfortunate bowel movement.

Riggs had just secured an unanimous points decision victory at UFC 57 over Nick and despite both being in need of medical assistance – Diaz asked him for a fourth round.

With Riggs saying he then realised his foe was "missing some f****** screws" – he was approached again after being attached to an IV drip by nurses.

Speaking to UFC's Fightlore, Riggs said: "So after the fight, we go to the ambulance and my hands were just balloons. It was just swollen through my tape.

"He’s going in an ambulance too, for his face. They were asking me, 'How do you think you did in the fight?' I said, 'I’m glad I got the win, but I think I could have done better'.

Who is your favourite ever UFC fighter? Tell us in the comments section below.

"I think Nick is missing some f****** screws, man. Something is wrong with that guy!"

A dangerously dehydrated Riggs was paid a visit by both Nick and Nate – who didn't initially realise how badly the former WEC Middleweight Champion was hurt.

Nick said of the incident: "I walk into the hospital talking s***. As soon as I walk in the door with [Nate], this mother f***** is strapped to a God damn gurney (stretcher).

Riggs continued: "I have an IV pole I am carrying with me, because I am getting re-hydrated and he is sitting there and just got all stirred up in his head.

"He keeps talking and I was like, ‘Dude shut the f*** up, look at your face’. I turn back around, with my cup of urine and my IV pole and I hear him walking.

"As I turn, I see my tooth go and he dropped me. I didn’t share this with people, I actually s*** my pants."

Diaz takes on Tony Ferguson at UFC 279 after a late change of opponents that has left fans delighted.