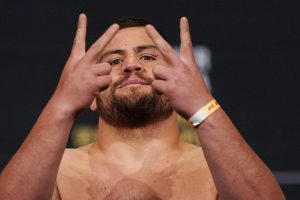 UFC heavyweight Tai Tuivasa has vowed to expose controversial American heavyweight Greg Hardy as a quitter, saying: “You can just see it in the guy … he gives up”.

Already on a roll of consecutive first round finishes, Tuivasa is now promising the same for Hardy when they throw down at UFC 264 in Las Vegas this July.

While the former NFL linebacker entered the UFC amid much hype in 2019, he has won only four of eight Octagon appearances since, which includes a loss last start against Marcin Tybura.

None of which impresses the Mt Druitt slugger dubbed Bam Bam.

“Greg Hardy is a quitter,” Tuivasa said this week from his Sydney training base. “You can just see it in the guy.

“And I’m going to make him quit again in July.

“The guy just isn’t a fighter.”

Set to be headlined by UFC megastar Conor Mcgregor, UFC 264 event will also see fans allowed back to the world’s fight capital.

Tai Tuivasa is preparing for his fight against Greg Hardy.Source:AAP

All of which is welcomed by Tuivasa, a cult favourite famed for drinking shoeys after a win.

“My last two wins, it’s been too quiet,” the Sydneysider said, referencing the lack of UFC crowds during Covid.

“So I’m excited to start winning in front of people again. When I bash Greg Hardy, I want to hear the people scream.”

Asked what he made of his American rival, Tuivasa continued: “No much.

“Apparently he said recently that when he splits my face, I shouldn’t go for double legs.

“He thinks he’s going to bash me and that when he does, I’m going to turn into a wrestler and try to take him down.

“Obviously he’s a very athletic guy. If you’ve played in the NFL then you’re definitely an athlete.

After winning the first three fights of his UFC career, and then dropping the next two, Tuivasa is now back on a winning run again after finishing Stefan Struve and Harry Hunsucker, both within a round.

For his last fight against American Hunsucker, Tuivasa needed just 49 seconds to finish with punches.

Before that, he also scored a spectacular KO of UFC veteran Struve.

So as for what he makes of Hardy?

“But he’s already talking s … so I hope he comes in ready to back it up.

“Because I’m definitely going to rock up.”

UFC 264 will be headlined by a lightweight trilogy showdown between McGregor and American Dustin Poirier.