Home » UFC » UFC 263: Israel Adesanya opens up on claims Marvin Vettori has the blueprint to beat him

UFC 263: Israel Adesanya opens up on claims Marvin Vettori has the blueprint to beat him 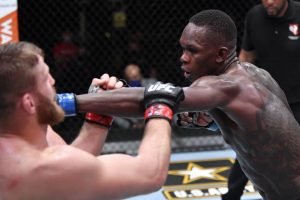 So you ask Israel Adesanya if the UFC middleweight division has been gifted the silver bullet for beating him?

After all, that’s the talk hanging over this fighter whose last outing was a loss.

Sure, it was up a division.

A unanimous decision defeat which was worrying not so much because it was first in 10 Octagon appearances, but for the way Blachowicz not only took the hyped New Zealander to the cage floor, but then kept him there.

Especially now on the eve of UFC 263.

With Adesanya, who still remains undefeated in his middleweight reign, now looking to defend once more against Italian Marvin Vettori.

So again, what do you make of those claims Blachowicz has provided the silver bullet?

“What? Lay on me like a blanket,” Adesanya said this week from his US base. “Lay on me and do nothing?

“If people think that’s (the silver bullet) they really are silly. Because if you look at my UFC career, you’ll realise people have been trying that for so long.

“But one guy succeeds because he has some size on me and, you know … steals the round.

“I welcome Vettori to wrestle me because I can then show him what’s up.”

Now back home after filming The Ultimate Fighter in Las Vegas, Volkanovski is tipping his great mate and training partner to score a spectacular third round finish in Sunday’s main event.

“Because on the feet, Izzy will be too much for him,” the Wollongong fighter insisted.

“Vettori, he’s tough. And he will definitely bring plenty, will make it ugly.

“But Izzy will just pick him off.”

So as for that silver bullet claim following the Blachowicz loss at UFC 259 in March?

“They all say that,” Volkanovski says. “Right up until Izzy starts popping them in the face.

“People see a couple of takedowns and think ‘OK, I’ll do that too’.

“But how many people have tried to take him down already and failed?

“With Blachowicz sometimes (the takedown) was just mid combo, when Izzy was committing to something.

“Then Jan timed it perfectly.

“And because of his size, he got Izzy flat on his back.

“If he didn’t do that, or if he shot in half a second earlier, that doesn’t happen — and Jan loses that fight.

“But all credit to him, because he did it.

“But to get Izzy down, you need to time it perfectly.

“You need to get in on them hips and be able to go through him while you’re grabbing them.

“You can’t just reach out, grab a leg and expect to take him down.

“You need to get in deep and that‘s not easy with someone whose range is as good as Izzy.”

Of course, Vettori also took Adesanya down in 2018, when the pair first fought and the Kiwi took a split decision win.

“Which is why Vettori says ‘I took Adesanya down last time so I’ll do it again’,” Volkanovski continued. “But Izzy’s takedown defence is so much better now than back then.

“He will be too much for Vettori.”