Megan Anderson has rebounded from a loss to score a first-round submission victory to get the Australians off to a perfect start at UFC 243. FOLLOW LIVE.

Whittaker faces off with Adesanya Little more than five years after he wondered whether he had a future in the UFC, middleweight champion Robert Whittaker takes on Israel Adesanya in Australia’s biggest MMA bout.

Both Whittaker’s and Adesanya’s stocks have risen considerably in recent years heading into Sunday’s UFC 243 show at Melbourne’s Marvel Stadium, which is expected to draw a crowd close to the UFC record attendance of 56,214 at the same venue four years ago. 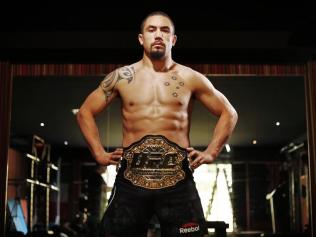 Whittaker, who played rugby league at development level before focusing on MMA, said he would have probably worked as an electrician if he hadn’t made the grade.

For a short time that looked a possibility as he suffered successive losses. He dropped a points decision to Court McGee in August 2013 and six months later, he suffered a first-round loss to Stephen Thompson.

“On the back of the second loss, I was thinking ‘maybe, this isn’t for me. Maybe I shouldn’t (continue)’. I was getting sick of it,” Whittaker told AAP. “Having back-to-back losses really makes you re-evaluate what you’re doing. “But thankfully I’m glad I didn’t (stop).

“I met my high performance coach Fabricio Itte, which was a big turning point for the way I structured my training.”

Whittaker’s third straight win after those back-to-back losses was in November 2015, when Adesanya was a spectator at the same venue they will fight in on Sunday.

The card has plenty of Australian and New Zealand fighters, with world-ranked heavyweight Tai Tuivasa, Jake Matthews and Megan Anderson among the local contingent.