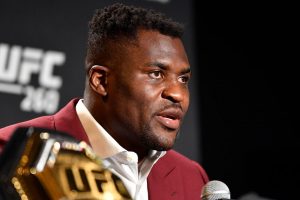 Tyson Fury withstood the punches of the most powerful heavyweight boxer in the world during his trilogy series with Deontay Wilder – but has been warned UFC champion Francis Ngannou would hit him harder.

After stopping Wilder in the 11th round of their classic bout in Las Vegas last October, Fury is currently negotiating a WBC title defence with British rival Dillian Whyte.

Ngannou meanwhile has also had his mind occupied by preparing for his heavyweight title defence with Ciryl Gane in the main event of UFC 270 in California on Saturday night.

However, should both icons come through their respective clashes, then a historic meeting could be on the cards with the Cameroonian having declared his intent to switch codes and take on 'The Gypsy King'.

Some pundits have questioned the boxing credentials of Ngannou, 35, but his manager Marquel Martin believes his man could adapt, and also subject Fury to bombs beyond what Wilder was capable of.

"Francis is dangerous for Fury because the best fighter to fight Fury to date is Deontay Wilder. Deontay isn't known for 'sweet science' – he's known for his devastating power," he told Sky Sports.

"With that power, he was able to successfully land some power shots that put Tyson on the canvas a few times.

"I acknowledge it's very difficult to hit Tyson. However, if Francis was to put together six to 12 months on strictly boxing, I'm confident Francis can learn the mechanics and timing he'd need to land some power shots."

Martin did acknowledge he thins highly Fury, 33, but added his claims were based on evidence.

Would Francis Ngannou KO Tyson Fury? Let us know in the comments section.

"Now, I have all the respect in the world for Tyson, but Francis hits way harder than Deontay.

"That's not an opinion, that's a fact.

"Francis' power has been measured and proven and the experts concluded – he has the hardest punch in the world."

Ngannou, who knocked out Stipe Miocic to become UFC Heavyweight champion in March last year, has a 16-3 record of MMA, and has previously sparred with professional boxers Joe Joyce and Carlos Takam.

And Martin thinks as well as his skills, the star's tough upbringing in Africa has readied him for any challenge.

"Francis Ngannou – his mindset is like no one I've ever known. After all he's been through in life, he has no fear. Defying odds is what he's built for."