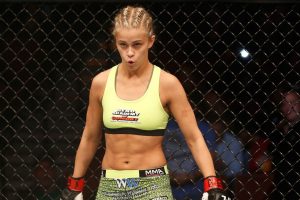 A rare combination of beauty and brilliance means Paige VanZant always appeared destined for success, but her earliest days with the Ultimate Fighting Championship (UFC) were anything but.

The Oregon native amassed a 3-1 record with smaller promotions before receiving her call to the big leagues, signed as one of 11 fighters for the UFC's new strawweight division in December 2013. From there, the plan was for VanZant to compete on the 20th season of The Ultimate Fighter, the finale of which would decide the inaugural strawweight champion.

In an apparent slip-up on the producers' part, however, VanZant was later ruled out of contention due to the fact she was only 20 at the time. Due to the fact there would be alcohol in the Ultimate Fighter house while shooting, the laws demanded competitors be at least 21 years of age.

She remained on the UFC books, however, and eventually made her UFC debut with a TKO win over Kailin Curran. Injuries meant that breakthrough didn't take place until November 2014, however, almost 12 months after she was first announced as a UFC fighter.

VanZant, 28, went on to win twice more in 2015, improving her UFC record to a perfect 3-0 after beating Felice Herrig via decision and submitting Alex Chambers. It was largely downhill for the fighter from there, though, as she went on to lose four of her next six fights before leaving the UFC in 2020.

The Ultimate Fighter has served as a springboard to success for many on the UFC roster, including current welterweight king Kamaru Usman, ex-middleweight champion Michael Bisping and fan favourite Nate Diaz. VanZant found success despite being turned away from the show, however, and has arguably enjoyed her biggest feats since leaving the promotion.

Do you think Paige VanZant will ever return to MMA? Let us know in the comments section.

Following back-to-back losses in the Bare Knuckle Fighting Championship (BKFC), VanZant has turned to a different trade and made her All Elite Wrestling (AEW) debut in September 2021. She's since signed a contract with the promotion in March and made several significant in-ring contributions.

That's in addition to the online empire VanZant has built selling content via adult subscription sites. The former Dancing With the Stars contestant regularly posts sultry snaps from exotic locations and told MMA Fighting last year that she's 'feeling comfortable with her life.'

It's little wonder as to why given VanZant boasts swathes of fans across the boxing, MMA and wrestling communities. There may be a return to MMA in future given she only turned 28 in March, but one of the industry's most well-known names can afford to feel content with her journey thus far.