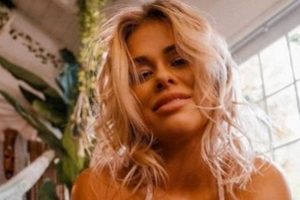 OnlyFans favourite Paige VanZant is set for a return to martial arts in February 2023 after it was confirmed she'll seek her first win in bare-knuckle boxing.

Former UFC prospect VanZant has lost both of her bouts in BKFC to date, surrendering decisions to Britain Hart and fellow UFC alumnus Rachael Ostovich in 2021. However, the blonde beauty will hope third time's the charm as she seeks to avenge that winless run in the new year.

"She'll fight February 27 on our Knucklemania 3 card," said BKFC founder David Feldman in a recent interview with Curran Bhatia. "That one will take place in New Mexico. That's going to be a great card, we've got some sensational bouts on that card.

Do you think Paige VanZant will ever return to the UFC? Let us know in the comments section.

"It'll be our biggest event by far. The most talked-about one, I believe. We have some really, really big names who are going to be in the top three fights on that card. I'm excited about that one. That's probably when we're gonna see [VanZant] back."

Since her most recent BKFC loss to Ostovich in July last year, VanZant has expanded her horizons and established herself in All Elite Wrestling. That's on top of the 28-year-old's modelling success, which has included a move to adult subscription site OnlyFans.

VanZant formerly sold content through her own subscription site but eventually gave in and joined the major rival this past September. '12 Gauge' has been open regarding the financial security she's discovered since leaving the UFC behind to explore other ventures.

“I don’t have to, when I’m done fighting, get a regular job and have to go back to work,” VanZant said previously. “I’m not planning for when I retire to go to college or try to figure out what’s next in my life. I’m able to just fight and save money and plan when I want to retire, I can just retire.”

The former Dancing with the Stars contestant was slated to make her BKFC comeback in August. However, her matchup against Charisa Sigala was rescheduled to October before being scrapped altogether.

It remains to be seen whom VanZant will face in February if she does indeed grace the BFKC ring once more. Her third fight with the promotion is understood to be the last on her current contract, after which she could explore a return to mixed martial arts.