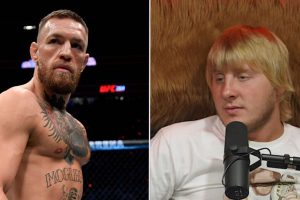 Paddy ‘The Baddy’ Pimblett believes he could one day face Conor McGregor in UFC.

The beloved Liverpudlian may have only competed in three UFC bouts, but he has already made a huge name for himself. His ruthless submission victory over Jordan Leavitt at UFC London extended his currently impeccable record in the Octagon to 3-0.

While his credentials do not quite come close to that of McGregor’s, fight fans and pundits alike do see plenty of similarities between the two fighters. And Pimblett appeared confident when talking about the possibility of the pair one day coming to blows in UFC.

READ MORE:Paddy Pimblett taps out 10 US Marines in a row as he displays epic submission skills

“You never know lad, me and him might end up fighting,” Pimblett said to ‘Steve-O’s Wild Ride!’ podcast. “It’s a possibility.

“[We can] come back down to 155. That would be the biggest pay-per-view in the history of the UFC.” Coincidentally, the 27-year-old also revealed he and fellow UFC star Molly ‘Meatball’ McCann, met and spoke to the Irishman on FaceTime when they were drinking and dining at the pub he owns in Dublin.

“Me and Molly were in there having a drink and a meal,” Pimblett added. “He was on FaceTime with us and I think he did say something to me about my speech and that. I was like ‘thank you’ and he said something else about me.

Do you think Paddy 'The Baddy' Pimblett could beat Conor McGregor? Let us know in the comments section below

“But I couldn’t hear exactly what he was saying, because we were in a pub and the music was loud. I wish there was a pair of earphones to put in.

“But he sorted the bill for us so, Conor’s a scouser.” Their early encounters appear to be of friendly admiration and mutual respect.

Whether this continues into the future or extends into any potential pre-match promotions and press conferences remains to be seen.