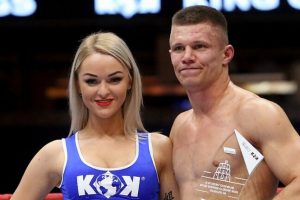 An MMA fighter has been arrested after an alleged attack on two women while brandishing a knife.

Vitoldas Jagelo, a well known star in Lithuania, was detained in his home country after the alleged incident at a private New Year's Eve party.

One of the victims told LRT that they had been left with a broken nose and tooth after he came at them with a knife.

The victim, named by the publication as Viktorija Pometko, also claims that the alleged attack was unprovoked and took place in front of their young children.

The Lithuanian publication claims that it has seen images of the injuries, but decided not to publish due to their severity.

Local police confirmed that Jagelo was taken to a local detention centre, but it is not clear whether he has been charged formally with any offence.