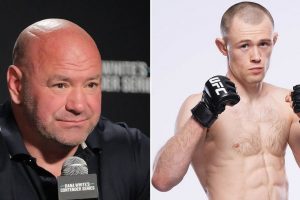 Jake Hadley (8-0) is out to justify the blind faith of UFC president Dana White by winning on his return to the octagon during UFC Vegas 54: Blachowicz vs. Rakic on Saturday evening (April 14).

The 25-year-old undefeated flyweight is making his full debut in the premier MMA promotion following a rear naked choke contender series victory over Mitch Rasposo back in October.

Despite his fine performance ending in a comprehensive second-round victory, UFC chiefs didn't want Hadley to be handed the golden contract after he missed weight for the make or break bout – something that he insists will not happen again.

However, White went with his gut in handing the "special" youngster a chance to impress on the biggest stage admitting that he broke "all his own rules" in the process.

He said at the time: "When I left the back room, my instructions were to not sign this guy."

"According to Hunter [Campbell], Sean (Shelby) and Mick (Maynard) stormed out of the room when I did and took off tonight so they’re not happy about it.

HAVE YOUR SAY! Who will be the next UK star to become UFC champion? Tell us in the comments section

“I just have a gut feeling that this kid has something special and I broke all my own rules and didn’t listen to what they said, so hopefully I’m right on this and this kid doesn’t make a d***head out of me."

White then said that Hadley "wasn't a popular guy" throughout fight week, before calling for a fresh start after handing over the contract – which broke his own rules about signing fighters who miss weight on the Contender Series.

Hadley believes cultural differences were behind his lack of popularity, insisting that he never meant to upset anyone on his path into the UFC.

Speaking to Daily Star Sport days before his official UFC bow, Hadley said: "I wasn't shocked that some of them didn't want to sign me after I missed weight, but the performance was a good one."

"Obviously the matchmakers must think something of me by putting me on the main card and putting me against a guy with 24 pro fights.

"With this win, it puts me in a position to be fighting ranked guys."

The opponent comes in the form of Brazil's Allan Nascimento, who has won 18 of his 24 bouts but lost on UFC debut against Tagir Ulanbekov back in October.

The secret to Hadley's calm approach to the bout could well be continuity, with the Fearless MMA prospect not only in the same hotel that he stayed in while on the Contender Series, but even the same room.

What does the perfect night and rest of 2022 look like for Hadley? He says: "A perfect night would be finishing in the first round, $50,000 bonus and coming out without a scratch on my face.

"After that, fighting in July at UFC London. That would be a perfect outcome, but I've trained like an animal and I'm prepared for a war."

Watch Jake Hadley take on Allan Nascimento at UFC Vegas 54: Blachowicz vs. Rakic on Saturday April 14, live on BT Sport 1. Coverage starts from 1am with prelims on UFC FIGHT Pass starting at 12:30am.