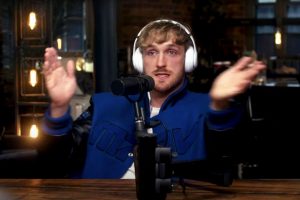 Logan Paul boldly claimed he is “taking out” UFC icon Paddy ‘the Baddy’ Pimblett with a “kick to the jaw”.

The YouTube boxer is well known for his audacious claims and remarkable self-confidence, but even this was a particularly bold statement from the 27-year-old. Pimblett is now getting back into fighting shape ahead of his next bout on July 23, after a calorie laden, treat filled eating binge that proceeded his victory against Kazula Vargas.

The Liverpudlian is infamous for his post-fight, gut-busting eating frenzies, that began by eating a whole pizza during his post-bout press conference in March. But despite his brilliance in the UFC, Paul believes he is on a mission to “take out” the Brit.

READ MORE: Conor McGregor grabs his privates and fiancee Dee Devlin as they 'get frisky' on yacht

“I’m taking out Paddy the Baddy dude,” Paul quickly replied to the True Geordie podcast when asked about the prospect of fighting in the UFC. “I’m taking him out.”

When Paul was informed that Pimblett had sat in the same chair he was sitting in at the time, Paul quickly shouted: “Paddy has sat here before? F*** this chair.”

“I’m going to get him. A kick to the jaw brother”. Any potential meeting between the pair in the Octagon is incredibly unlikely at the current moment. However, Pimblett has not only conveyed his openness to a potential fight with the American, he has also believes he would “submit him quite easily”.

Do you think Logan Paul can beat Paddy 'the Baddy' Pimblett? Let us know in the comments section below

“He knows who the boy is, doesn’t he,” Pimblett said to ‘the Schomo’. “He knows who will put bums on seats, lad. I can’t see him mentioning anyone else.

“I know he’s a lot bigger than me, but I don’t think it really matters, to be honest. I think I’d submit him quite easily and quite quickly but you never know, anything can happen in a fight.

“If Logan Paul ever does want the fight, lad, I’m open to hearing what numbers he’s coming at us with.”