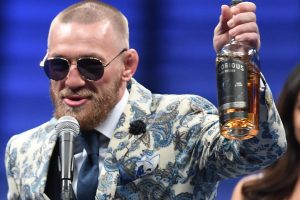 Conor McGregor is making it rain like never before.

The 32-year-old’s career inside the Octagon may be at the crossroads, but his entrepreneurial career is on an absolute tear.

It was announced this week McGregor’s Proper No. 12 whiskey label has been taken over entirely by tequila giant Jose Cuervo and its parent company Becles.

McGregor is yet to announce plans to remain as the face of the emerging brand — but he is for now out of the whiskey business all together.

The Proper No. Twelve drink, which was named after McGregor’s hometown Crumlin in Dublin, was launched in 2018 and was soon flying off the shelves.

Conor McGregor holds up a cup of his Notorious-branded Irish whiskey.Source:AFP

The increasingly popular tipple had already agreed to a deal allowing Becle a 49 per cent ownership stake in the company, and this week’s further sale of 51 per cent leaves the company entirely in the hands of the alcohol conglomerate.

The exact financial details surrounding McGregor’s Eire Born Spirits, the company established by the fighter and manager Audie Attar behind Proper No. 12 Twelve, have never been disclosed.

However, McGregor has previously trumpeted a meteoric rise for the brand with sales of more than $40 million in its first financial year. He claimed in 2019, he was a billionaire on the back of his whiskey dealings, claiming to have generated sales of more than $1 billion in the United States.

Forbes last year valued his net worth at $AU191 million – but the estimate did not take into account his whiskey empire, which has been a closely guarded secret.

The company has also done its best to keep its financials under wraps, but reports claimed last year the company was valued at 200m euros on the back of Becles’ share purchases in 2020.

McGregor and Attar reportedly held an 80 per cent stake in the company when it was founded, with Becle buying in from the start with a 20 per cent stake.

The finalised sale puts McGregor’s earnings to another level.

It is easy to see why McGregor claimed last year he would be No. 1 on Forbes’ annual sporting rich list if his Proper No. 12 empire was taken into account.

He was instead valued to have a net worth of $191 million on the back of his return to the Octagon in 2020, pushing his earnings for last year to $US48 million — finishing No. 53 on the annual Forbes rankings of athletes’ earnings.

Becles’ confirmed McGregor’s payday in a statement this week.

“On February 23, 2021, the Company provided notice of the exercise of its call option to acquire 51 per cent of the equity interests of EBS.”

“We expect to announce further details upon the closing of the transaction.”

McGregor’s fighting career has been heading in the other direction. His comprehensive defeat at the hands of Dustin Poirier at UFC 257 in January left UFC boss Dana White unsure if the Irish star could make it back to the top of the lightweight division.

He was medically suspended by the UFC for six months after his legs took a pounding and he was spotted walking on crutches after the fight.

McGregor has promised to return and a trilogy fight with Poirier is being lined up, but his diminishing record of just one win inside the Octagon since 2016 has led to speculation he will walk away as early as this year.

At least he will be able to cry himself to sleep on his bed of money.