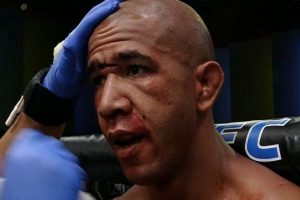 UFC star Gregory Rodrigues suffered a gruesome gash to the forehead in his victory over Chidi Njokuani, with some fans dubbing it the worst cut they had ever seen.

The Brazilian star picked up the horrific injury between the eyes early on after taking a knee to the face from Njokuani that almost ended the bout before it had really begun. But Rodrigues somehow managed to power through and survive not only the opening round, but also a potential doctor's stoppage to reemerge for the second round.

With the fight allowed to continue, Rodrigues didn't take long to find his rhythm, putting his gruesome injury to one side to defeat Njokuani with an intense ground-and-pound. The 30-year-old fighter picked up a handy £43,000 bonus for his troubles, but all UFC fans could focus on was that cut.

One Reddit user called it the "worst cut in the UFC". As someone else added: "I legit got queasy looking at that. I don’t know how he kept fighting, let alone winning."

Is this the worst cut you've ever seen in UFC? Let us know in the comments section below.

A third person said: "That's easily in the Top 5 worst cuts I've ever seen happen in a MMA fight. So gnarly, Rodrigues a warrior." While another Twitter user wrote: "Gregory Rodrigues MY GOD!!! One of the worst cuts I’ve ever seen."

"I know one thing, I'm born for this," Rodrigues told Daniel Cormier in the immediate aftermath of the fight. "It doesn't matter, man, they need to kill me but alive or dead you're coming with me – I'm a Robocop.

"I want to say one thing, I love you Jesus, thank you very much for everything you do in my life, that's the name. I felt the blood coming out and then my head said 'calm down, don't rush'. But I felt it's a war, man. I'm grateful to fight against the greatest guys in this cage.

"I want to say thank you Dana [White], Mick [Maynard, UFC Vice President of Talent Relations]. I've said I'm a guy who takes a challenge, I want to go against the best so I'm here, let's go, I'm ready to go.

"I love what the UFC do, the matchmakers do amazing work so I'm going to wait for them, whatever you guys offer me I'm here and I will take it. Thank you very much, thank you UFC, I appreciate being here. This is my house and I'm here to stay."

UFC president Dana White later shared two photos of the cut, displaying its full severity before showing fans what Rodrigues' face looked like after the horrific gash had been stitched up.