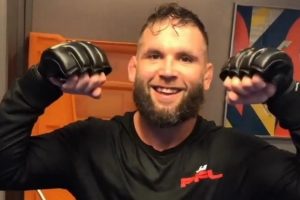 Former UFC star Jeremy Stephens shaved his head and beard in a last-ditch attempt to make weight for his fight this Friday (June 17).

Stephens, who left Dana White's company in January after nearly 15 years, is gearing up for his second outing in the Professional Fighters League. But his preparations haven't gone smoothly as he arrived with just 10 minutes of the weigh-in window left.

The lightweight was sporting an extreme new hairless look which helped him make weight at 156lbs, with a one-pound allowance for a non-title fight. He did still need the towel to cover his modesty, though.

Stephens had a lengthy yet rather unnoteworthy career in the UFC, with perhaps his most memorable moment being an exchange at the UFC 205 press conference which sparked Conor McGregor's famous line: "Who da f*** is that guy?"

He has twice failed to make weight in his career but has narrowly avoided that fate for a third time as he looks to pick up his first win since 2018 and end a run of six straight losses.

“Friday is going to be a big huge statement for people to remember who the f*** I truly am and what I really do and the type of violence and the type of energy that I bring to the sport,” Stephens told MMA Junkie Radio.

Are weigh-ins dangerous for fighters? Let us know in the comments section.

“I’ve never went to the back of a UFC or even PFL [fight] and heard, ‘you f***ing suck. Oh that was a terrible fight. That was boring’. I never heard that. The only thing I’ve ever heard is, ‘Jeremy, we love you'.

“I didn’t realise how many fans and how many people really, truly followed me, and I inspired throughout over the years. Until I left the UFC.

"Until that door closed, another door opened, I was like, ‘Wow, people do really enjoy my fights,' They really are my fans. They really follow me over here to the PFL.

“Some people didn’t even know what the PFL was, but they’re like, 'we’ve got your back’. They’re tuning in, and that’s the type of love that I’m really carrying over.

"Friday night is going to be another big statement and remind people who the f*** Jeremy Stephens truly is. That’s a very dangerous, very violent, skilled, sharp, smooth-looking motherf*****.”