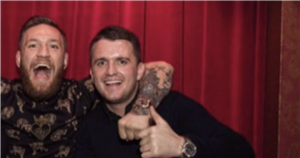 Conor McGregor’s friend appeared in court on Monday charged with a "vicious" attack on a man outside the UFC star’s south Dublin pub.

There were objections to bail from the gardai who pointed out the pair had "extremely expensive" designer clothing on when they were arrested – including a watch worth an estimated €20,000 belonging to Mr Griffiths.

Both men were granted bail subject to specific conditions.

Two men – alleged to be Murray and Griffiths – were seen knocking a 'stranger' to the ground, causing him to go unconscious in the process.

The victim was punched and kicked several times around the head, Garda Costigan told the court.

The pair were subsequently arrested, and made no reply when charged after the caution, the court heard.

CCTV footage of the episode has been acquired by the gardai who told the court that it demonstrated an “unprovoked” and “vicious” attack on a man who was enjoying a night out at the pub with work colleagues.

Objecting to bail, Garda Costigan argued Mr Murray has the money and “resources” to leave the country. He said that gardai have concerns that he will not attend his next court appearances if he is released from custody.

Garda Costigan added that Mr Murray has frequently left Ireland for foreign countries such as Dubai.

No extradition treat currently exists between the two jurisdictions.

Also giving evidence, Garda Claire Young of Crumlin Garda Station told the court that Mr Griffiths, who is charged with the same assault, has "access to finance" and was wearing "extremely expensive designer brands on arrest", including the watch with an estimated value of €20,000.

Although Mr Griffiths has no previous convictions, Garda Young said officers believe he has the "capability and resources to evade the jurisdiction."

It was also point out that Mr Griffiths has been residing in California for the past 20 years, raising concerns that he could go there if he was granted bail.

Further evidence was also given to the court, centring on the extent of the victim's injuries.

Garda Costigan told the Judge that the victim was undergoing a brain scan – the result of which was not yet available.

The unnamed injured party also suffered cuts and bruises, the court was informed.

The court also heard how the CCTV footage was in high definition and "extremely clear" – showing what gardai called "an unprovoked, vicious attack."

Garda Costigan also claimed that the incident "could have been a lot more serious" if people had not intervened during the attack.

Defence counsel Keith Spencer BL however contended that gardai were arguing that Mr Murray had travelled to "far off places" without offering any evidence or details of those trips given.

He said Mr Murray will be present for his next court appearance and he will not flee the jurisdiction.

Presiding Judge Michael Walsh decided that after hearing the evidence he would grant Mr Murray bail on condition that he surrender his passport to gardai within 48 hours.

Mr Murray was also required to enter a bond of €1,000, and told to reside at his home address and sign on daily at Sundrive Garda Station.

Mr Griffiths was also granted bail on condition of a €2,000 bond and that he gives notice to gardai if he intends to travel – and the purpose and destination of that trip.

The pair are due to appear in court again next Friday.