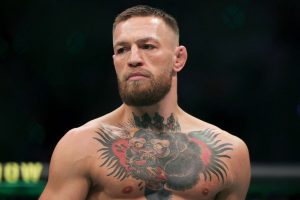 UFC icon Conor McGregor is in the hunt for an opponent when he's expected to return to the Octagon in 2023, but Justin Gaethje is one foe he may be wise to avoid.

That's after Gaethje's manager, Ali Abdelaziz, predicted his client would put 'The Notorious' "in a wheelchair" if they ever finally met inside the cage. McGregor has been repeatedly linked with 'The Highlight' since moving up from featherweight, though the prospect of a bout has never gained much momentum.

McGregor, 34, hasn't fought in mixed martial arts since July 2021 when he suffered a serious leg fracture en route to a second straight loss against Dustin Poirier. Gaethje, also 34, is also in the midst of an injury comeback, having lost to former lightweight champion Charles Oliveira at UFC 274 this past May.

Do you think Conor McGregor would beat Justin Gaethje in the Octagon? Let us know in the comments section.

"I would like to see Justin Gaethje destroy Conor McGregor and put him in a wheelchair," said Abdelaziz when asked about Gaethje's future plans during a recent appearance on The Schmo and The Pro. "I would love to see that."

McGregor (22-6) has been bombarded with allegations regarding performance-enhancing drugs following his remarkable weight gain in the past 18 months. It also recently emerged the Irishman hasn't been tested by doping agency USADA in 2022, and fighters must undergo at least six months of testing before they can be cleared to compete in the UFC.

Gaethje (23-4) recently said he's in the market for "fair competition" when quizzed about the accusations surrounding McGregor. “If he's on steroids, then give me steroids," said the Arizona native, although McGregor has not been found in breach of any doping offences.

"Doesn't matter," replied Abdelaziz when asked which weight class McGregor and Gaethje might fight at. "[McGregor] can take all the steroids he wants, he can take all the juice, EPO and everything. Whatever he wants to take, he can take. I would like to see this fight but we know he doesn't like to fight anymore. He wants easy fights. He's probably not going to fight Justin Gaethje."

Two of Gaethje's last three bouts have been for the UFC title, losing via submission to both Oliveira and Khabib Nurmagomedov. It was only months after his most recent defeat to 'do Bronx' that Gaethje revealed he'd suffered significant injuries from a bicycle crash 18 days prior.

The former World Series of Fighting (now Professional Fighters League) champion is 6-4 since joining the UFC in 2017. Gaethje wasted little time in becoming a favourite among fans, however, and a no-holds-barred approach means he's gone to a decision just three times in 27 career outings.