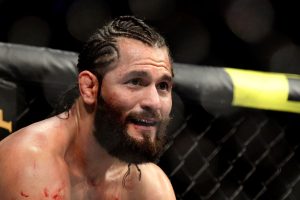 Conor McGregor waited until Jorge Masvidal’s birthday before hurling a torrent of abuse at the American for withdrawing from his fight with Leon Edwards at the upcoming UFC 269.

Edwards is in scintillating form and is unbeaten in his last ten fights in the octagon, and ahead of the contest, Masvidal pulled out of the contest due to an undisclosed injury.

McGregor took to social media to vehemently criticise the American UFC star, who turned 36 on Friday, for avoiding Edwards.

The 'Notorious' claimed Masvidal should have his UFC 'BMF' Championship belt stripped from him after he controversially defeated Nate Diaz via a doctor stoppage and TKO.

The 33-year-old also ridiculed Masvidal for donning an old Versace robe during a walk-in last year – the same jacket McGregor himself has been seen wearing in a recent training session.

"It’s also Jorge masvadal birthday but he a b**** for bottling the fight against Leon," McGregor said in a tweet. "F*** your 'injury'.. You sign to fight, you fight," McGregor wrote on Twitter.

"Strip that belt from him that he never even won. H** in a housecoat. The f*** was that about as well? Last seasons Versace house coat hahaha wtf!"

Do you think Jorge Masvidal is ducking Leon Edwards? Let us know in the comments section.

The Brit believes Masvidal did not want to fight him and is using the injury as an easy excuse.

"Disappointed but honestly I knew this fraud didn’t want to fight me anyway," a frustrated Edwards tweeted on Thursday.

“He was just a stop off on the way to the title. The goal remains the same.

“Much needed family time now, Kamaru Usman, I will see you soon."

The 30-year-old UFC fighter, based in Birmingham, has been in electric form and defeated Diaz in his last fight back in June.

Edwards' unbeaten run of ten fights across five years has seen him triumph nine times. The other fight ended in a no-contest decision over Belal Muhammad, which was ruled due to an accidental eye poke.

He has defeated the likes of Rafael dos Anjos, Gunnar Nelson and Donald Cerrone – and the 30-year-old was called out by rising star Khamzat Chimaev, who offered to fill in for the injured Masvidal.

Masvidal against Edwards is reportedly still planned, but it will not happen at UFC 269 in December.