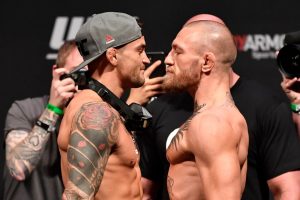 Conor McGregor has finally made a $500,000 donation to a charity in Dustin Poirier’s hometown – but not to his UFC rival’s own foundation.

McGregor was knocked out for the first time in his career against Poirier at UFC 257 back in January, with the latter wiping him out inside the second round of their highly-billed rematch on Fight Island.

During the week of their fight it is believed McGregor made a pledge to donate half a million dollars to The Good Fight Foundation, Poirier’s non-profit company which helps raise money for those in need in his hometown of Louisiana.

However, the Irishman had been accused on Twitter of ignoring emails about the donation for the past two months.

After McGregor claimed he will win their scheduled trilogy bout on July 10 with a ‘front kick to the nose’, Poirier wrote: “That's a fun prediction! you also predicted a donation to my foundation and you and your team stopped responding after the fight in January. See you soon. July 10th Paid In Full!”

McGregor then hit back: “A donation, not a debt. We've been awaiting the plans for the money that never came. I do with all my donations. Know where it's going dot for dot. Otherwise it goes walking.

“As is the case with a lot of these foundations, sadly. You took the McG over the belt shows I was right.”

He then produced an even angrier tweet directed at Poirier and suggested their trilogy bout is now off, saying: “You're ripped you inbred hillbilly. Why do you wink with your ears? You f*****g brain dead hillbilly. 500k with no plan in place. Ye hang tight. Fool.

“You must be new to money. The fight is off btw. I'm going to fight someone else on the 10th. Good luck on your old contract kid.”

Nevertheless, McGregor is now understood to have made the donation to a charity in Louisiana – albeit not where Poirier was expecting.

The Notorious has instead given $500,000 to the Boys & Girls Club of Acadiana, based in Lafayette, Louisiana.

Poirier’s foundation has worked with the charity in the past, however a representative of the fighter confirmed to TMZ that they were not involved with McGregor’s donation.

A post on the Boys & Girls Club’s Facebook page read: “Boys & Girls Clubs of Acadiana received an unexpected call last week and are humbled to share that Conor McGregor is donating $500,000 to impact youth in South Louisiana by supporting our upcoming 2021 Summer Camp and ongoing health and recreation activities in our 6 Club sites.

“This investment is a gamechanger! Thank you, Conor, for helping to ensure that our kids have what they need to grow and thrive this summer!”

READ MORE:Conor McGregor calls out Kamaru Usman for "copying" tactics – and vows to smack him