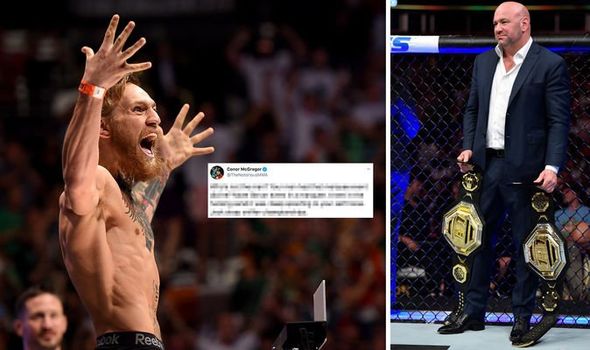 Conor McGregor has hit out at UFC president Dana White for claiming he’s no longer top dog in the promotion.

Ahead of the UFC’s return to Boston, White insisted McGregor had lost the title to Khabib Nurmagomedov following his fourth-round submission loss to the Russian last October.

“Khabib is the man now,” White said. “Conor isn’t the man anymore, so Khabib gets to sit back and call the shots.”

It didn’t take well for McGregor to get wind of White’s latest assessment of the lightweight division and he was quick to vent his fury on social media.

“Who’s not the man?” a fired-up McGregor tweeted. “Your man had that marquee event did he? More like an event in a marquee.

“A tent in the f*****g sand it was. Keep spoofing to your self horse. Jock strap sniffer championships.”

McGregor’s mentioning of an event in a ‘tent in the f*****g sand’ was a reference to Khabib Nurmagomedov’s UFC 242 bout with Dustin Poirier, which took place in a purpose-built arena in Abu Dhabi in September.

And his use of the phrase ‘Jock strap sniffer championships’ was a subtle dig at Nurmagomedov for opting not to strike with him for a prolonged period of time during their UFC 229 grudge match last October.