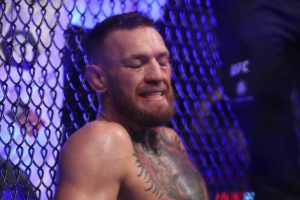 ‘The Notorious’ is becoming gradually less so following a second straight defeat to Dustin Poirier as Conor McGregor continues to plummet in the UFC’s lightweight rankings.

Former UFC dual-weight champion McGregor, 33, was bumped from fifth to seventh following his most recent loss to Poirier at UFC 264 earlier in July.

However, Islam Makhachev’s submission victory over Thiago Moises on Saturday has sent the Dubliner tumbling another two places to ninth in the lightweight hierarchy.

Few can argue with the movement considering McGregor’s sole win at 155 pounds was his title win over Eddie Alvarez in November 2016, though he never staged a defence of the belt.

Poirier, 32, dominated The Notorious when they met at UFC 257 in January, levelling their head-to-head record after McGregor finished him via TKO in their maiden clash back in 2014.

‘The Diamond’ was again in the ascendancy following the first round of their trilogy encounter this month, but a freak injury meant the fight was called after McGregor broke his lower leg.

UFC president Dana White said after the result that a fourth fight between the pair will happen, but No. 1 contender Poirier will get a title shot against Charles Oliviera next.

"It sucks, it's brutal and it's not the way you want to see fights end," White said. "Dustin Poirier will fight for the title and when Conor is healed and ready to go, we'll do the rematch.”

Do you think Conor McGregor will fight in the UFC again following his leg break? Let us know in the comments section.

"Listen, the fight didn't get finished. You can't have a fight finish that way. We'll see how this whole thing plays out. Who knows how long Conor is out. Poirier will do his thing until Conor is ready."

Tony Ferguson and Rafael dos Anjos have moved down to sixth and seventh, respectively, in order to accommodate the rising Makhachev, who climbed four spots in the latest update.

And just as few can argue against McGregor’s stock falling, no-one can dispute the Dagestan native deserves his place among the UFC lightweight elite.

A long-term friend and training partner of McGregor’s old adversary, Khabib Nurmagomedov, Makhachev advanced his record to 20-1 after collecting his eighth consecutive victory against Moises.

The 27-year-old has also finished four of his last six opponents, and many consider it only a matter of time before he gets his own chance at the UFC title.

Only the world-class likes of Justin Gaethje, Beneil Dariush and Michael Chandler sit ahead of Makhachev in second, third and fourth, respectively.

Chandler—who suffered a TKO loss to Oliveira in a showdown for the vacant lightweight crown in May—recently called out former contender Gaethje in an Instagram Live session.

“Gaethje should be next. There’s no doubt about it,” the former Bellator lightweight champ said. “There is no secret [Makhachev] and Gaethje both share the same management, so obviously that management would want to say, ‘Hey, throw Islam on the trail. Throw Islam on the Chandler trail so that it takes the heat off of Gaethje’.

“But Justin Gaethje: Come on, bro. You call yourself a fighter, and you are — you’re one of the most exciting guys in mixed martial arts. Be prepared to make a highlight or be made a highlight, because that’s what I am. That’s what I’m ready to do.”

It’s not all bad for McGregor, however, after the Irishman recently flaunted his purchase of a 19.2-metre Lamborghini yacht to his 41.3m Instagram followers.