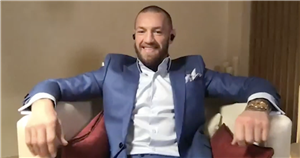 Conor McGregor has taken another jibe at rival Khabib Nurmagomedov, casting doubt on his weight for the fight against Justin Gaethje.

The Russian saw off his opponent at UFC 254 last October, seeing off the 32-year-old with a triangle choke in the third round.

Fighting in the lightweight division, The Eagle struggled to make weight – and was even forced to weigh in naked behind a towel.

And McGregor, who is preparing for his first fight in a year at UFC 257 against Dustin Poirier, used a recent interview to suggest Khabib was deceiving fans.

“He's enjoying himself, I don't think he made weight the last time either, I was very sceptical, it was very unusual behaviour.”

Khabib announced his retirement from fighting after the win over Gaethje – the first following his dad’s death.

But UFC chief Dana White hinted that there could be a rematch between The Eagle and his lightweight rival.

Speaking ahead of McGregor’s rematch against Dustin Poirier, the 51-year-old said: “Right now, he [McGregor] is as focused as he's ever been.

“I don't know if this is going to be the same Conor after the Poirier fight, but if this Conor sticks around for the next year, how do you not do Khabib vs Conor again?”

McGregor took on the Russian over two years ago at UFC 229 for the Lightweight Championship, which he lost in the fifth round.

It saw the Irishman step away from the Octagon before returning against Donald Cerrone in January 2020, knocking out his opponent in 40 seconds.

Taking on Poirier for a rematch on January 24, The Notorious has been getting into the “best shape of his life”.

But the 32-year-old has also used his training camp to keep a future boxing fight with fighting icon Manny Pacquiao possible.