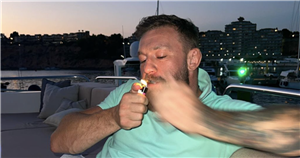 Former UFC champion Conor McGregor has been slammed by his fans after sharing an image of himself lighting a spliff on a yacht.

McGregor has now been out of the Octagon for over a year after suffering a horror injury in his loss to Dustin Poirier, but is showing no sign of returning any time soon. The 'Notorious' remains one of the most loved UFC fighters, but even his most loyal fans are starting to turn on him.

Ever since McGregor lost his title to Khabib Nurmagomedov he hasn't been the same, and a 40 second win over Donald Cerrone remains his only win since November 2016. And following controversy in McGregor's personal life, and also his recent partying in Ibiza, the Irish fighter has been labelled as an "embarrassment" by fans.

McGregor is still yet to return to full-time training, and at the age of 34 his time is running out. It's looking more and more unlikely that McGregor will be back in action this year, especially after being spotted partying regularly, and now glamorising smoking on his Instagram.

Fans are desperate to see him get back into UFC action, and in an attempt to spark change he has been slammed for his actions online. "This guy will never be serious again," said one fan. "it makes me sad, imagine if he was still as hungry," another added.

One passionate fan wrote: "It really sucks seeing an iconic athlete embarrass himself on a platform. As a father I would never want my child to see something like this on a national scale. You never saw public displays like this from Kobe, LeBron, Brady, the list is endless."

Will Conor McGregor return and win a UFC title again? Let us know in the comments section below

Others were more brutal, and have written off McGregor already. "Good to see you enjoying the good life. But your time fighting is all done champ! Enjoy life," said one fan.

"Great example for kids this lad? Wise up," another added. And one fan really went deep on McGregor's morals, as they wrote: "Your lack of motivation is an insult to the people who believe in you."

McGregor has recently been in talks with Floyd Mayweather over a rematch, but talks have since gone quiet. However, it's clear that fans want to see him back in the UFC, although due to his recent hiatus it's not clear who he could fight.