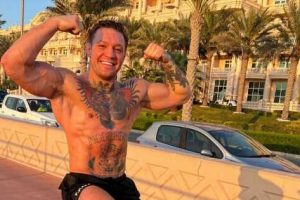 Conor McGregor has issued a new call-out, telling his target to not "be scared" amid his latest war of words with long-time nemesis Khabib Nurmagomedov.

The former UFC foes are tangling once again via the media after Nurmagomedov put his own spin on one of McGregor's most famous quotes. 'The Eagle' hailed his native Dagestan's growing dominance in mixed martial arts after team-mates Islam Makhachev and Usman Nurmagomedov claimed lightweight belts in the UFC and Bellator, respectively.

“Right now we have current UFC and Bellator lightweight champions,” said Nurmagomedov following his cousin Usman's victory over Patricky Pitbull at Bellator 288 on Friday. “This is amazing. I hear a long time ago when one guy was talking about ‘We’re here to take over’ but we're here to take over.”

The comment was a clear dig at rival McGregor, who famously declared the Irish were "not here to take part—we’re here to take over" after a Dublin win over Diego Brandao in 2014. Despite submitting to Nurmagomedov when they finally met in October 2018, McGregor has long teased a rematch and used the Russian's retirement as bait in his response.

“I fight on,” replied 'The Notorious' in a now-deleted tweet. “Your fathers (sic) plan is never complete because you quit and ran, brother. God bless. I’m still here if you wanna go again. But your fear of defeat means you’ve already lost. Run from it all you want. We all lose in the end. Death takes us all. I fear nothing but God.”

Do you think Conor McGregor will fight in the UFC again? Let us know in the comments section.

Following up on that retort, McGregor quoted another UFC legend when he posted a picture flexing his ballooned biceps on a bike alongside the caption "Don't be scared homie." The comment was a homage to Nick Diaz—older brother of another of his nemeses, Nate—who said the same to K.J. Noons inside the cage following a 2007 defeat while fighting in EliteXC.

McGregor, 34, uploaded the same image to Instagram but captioned the post: "If Arnold Schwarzenegger and Bruce Lee had a mad Irish baby." The Dubliner has been consistent offering his fans updates on his growing frame while he's been filming for his major Hollywood debut in Roadhouse.

A rematch against Nurmagomedov looks impossible for numerous reasons, not least because Khabib appears content coaching since his retirement. What's more, McGregor's substantial gains make it look highly unlikely he'd be able to get back down to the lightweight limit of 155 pounds, where he and Nurmagomedov previously met.

"Don't be scared, homie" proved a success in Diaz's case, as he eventually rematched and defeated Noons when they clashed in the UFC, three years after his TKO loss due to a doctor's stoppage. But as McGregor approaches the 18-month mark since his leg-break defeat to Dustin Poirier, the MMA stars look unlikely to align for a second showdown with Khabib.