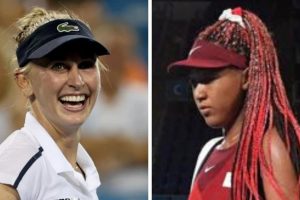 World No. 2 Naomi Osaka suffered one of her worst losses this season, falling to Jil Teichmann in a third-round match at the ATP and WTA Cincinnati Masters.

Teichmann took just over two hours to defeat Osaka, breaking the Japanese star three times in the final set to reach the quarter-finals.

It comes after reigning US and Australian Open champion Osaka lost in the third round at the Tokyo Olympics.

This was her first event outside her homeland since withdrawing from the French Open after the first round, saying taking questions from reporters after matches was causing mental issues. She skipped Wimbledon as well.

In her pre-tournament press conference at the start of the week in Cincinnati, a line of questioning from one reporter caused Osaka to break down in tears.

The 23-year-old, who had a first-round bye, struggled but captured her opening match, defeating American Coco Gauff 4-6 6-3 6-4 but came crashing down to earth against Teichmann as her week ended on a sour note.

This was a huge upset.Source:AFP