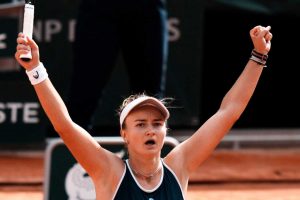 A player formerly considered a doubles specialist has just won the French Open to claim her first ever singles Grand Slam.

The 25-year-old Czech player had formerly enjoyed success as a doubles player, winning five Grand Slams in doubles and mixed competition, but only last month recorded her first victory against a top-10 ranked player.

"It's really hard to put words together right now, but I can’t believe what happened," she said. "I cannot believe that I actually won a Grand Slam."

Krejcikova, however, will have the chance to add more hardware Sunday, when she'll play with doubles partner Katerina Siniakova in the final against Magda Linette and Bernarda Perra.

Though some top draws like Naomi Osaka, who withdrew citing mental health concerns, were out of the picture, Krejcikova's path was not easy, as she defeated the fifth-seeded Elina Svitolina, 2018 French Open runner-up Sloane Stephens and Coco Gauff and Maria Sakkari before reaching the final.

After the match, Krejcikova paid tribute to her late coach Jana Novotna, the Czech tennis greawho died in 2017.

"Pretty much her last words were, “Just enjoy and just try to win a Grand Slam.' I know that from somewhere she’s looking after me and all of this that just happened, this two weeks, is pretty much because she is just looking after me from up there and I really thank her," she said. "It was amazing that I had a chance to meet her, that she was such an inspiration for me and I really miss her, but I just hope she’s happy right now, and I’m extremely happy."