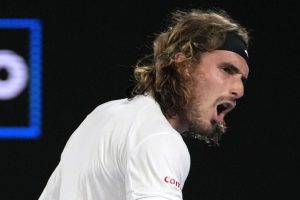 Stefanos Tsitsipas thrilled with all of his fantastic flourishes to defeat Jannik Sinner in a dazzling fourth-round encounter on Rod Laver Arena on Sunday night.

From his patterned shorts to his theatrical celebrations, and with his flashing forehands and superb athleticism, the Greek prevailed in a captivating performance. 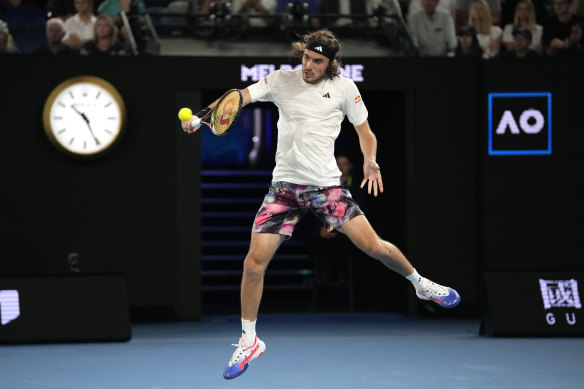 A Roland Garros champion in 2021, Tsitsipas is the highest remaining seed in the Australian Open, but he was forced to survive a stirring fightback from Sinner.

“It was a long match. I felt like I spent an entire century on this court playing tennis. What a great night,” Tsitsipas said.

“That was superb. A ripper, as they say here. We are out here and doing this together and I am really excited to be sharing moments like this out on the court.” 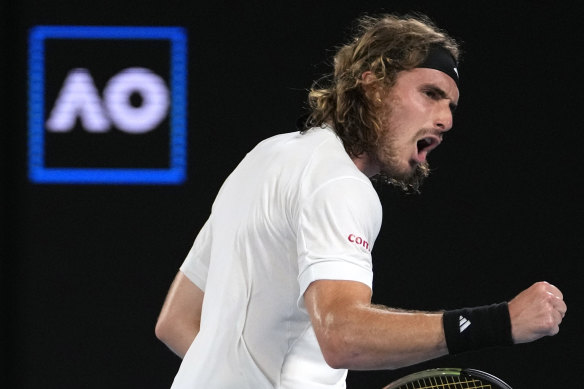 Stefanos Tsitsipas is into the quarter-finals.Credit:AP

Despite the power of their shot making, neither man was willing to give an inch on the baseline. They absorbed the sizzle on their rivals’ shots and returned them even harder.

Mentoring the combatants in a thrilling encounter from opposing coaching boxes were two members of Australian tennis royalty.

Mark Philippoussis, twice a grand slam finalist and former top 10 ranked star, is often a feature of the Tsitsipas support case whenever the Greek is playing a major.

Darren Cahill, a former US Open semi-finalist who has coached Andre Agassi, Lleyton Hewitt and Simona Halep to the world’s top ranking, has been working with Sinner recently. 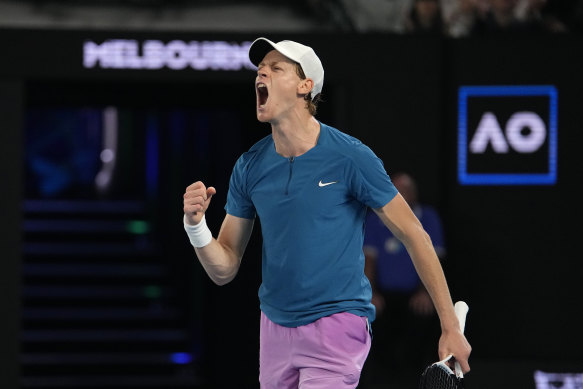 And watching from the front row was Rod Laver, who stayed to the end of the thrilling contest and received a standing ovation after being acknowledged on the court by Tsitsipas.

A semi-finalist in Melbourne for the past two years, the Greek remains unbeaten this year and extended to 10 a winning streak dating back to the ATP Tour Finals in November.

The 24-year-old will play Czech Jiri Lehecka on Tuesday for a spot in his fourth Australian Open semi-final from six appearances.

The world No.4 has always enjoyed the conditions at Melbourne Park and lifted his game when it mattered most against a rising star of the sport in Sinner.

The flair of his shot making and his colourful clothing make Tsitsipas an eye-catching player. But that does not camouflage the most crucial ingredient in his triumph over Sinner, namely his ability to hold his nerve at critical moments in the first two sets and in the decider.

Sinner had overcome a two-set deficit in his third-round clash against Marton Fucsovics and made a move early in the third set as he sought to unsettle the superb Tsitsipas.

On his first break point while leading 2-1, he was denied by the exceptional reflexes of Tsitsipas at the net. The Greek rose to the occasion on the second with a blazing backhand.

It took the deftest of touches from Sinner, who finally broke with a forehand drop shot, to edge ahead 3-1. With his confidence rising, he was clearly the better player through the third set.

When the Italian, who has reached quarter-finals at all four majors, broke the Tsitsipas serve early in the fourth set, the brow on the face of Greek’s father Apostolos deepened further.

He had reason to be concerned as his son’s grip on the quarter-finals spot loosened, for it was increasingly clear his 21-year-old rival was gaining a strong foothold in the match.

This was despite squandering break point opportunities by the dozens in the first four sets, with Sinner converting just four opportunities from the 26 that presented during the match.

In contrast, Tsitsipas pounced whenever a chance arose in the first two sets, converting all four break points.

He was wasteful early in the deciding set but gained the ascendancy when Sinner overhit a forehand on the sixth break point he was facing at 2-3. It was the chance he needed.

“I had an unbelievable opponent out here on the court playing incredible tennis in the third and fourth sets. (But) I stayed really calm, just like Mr Rod Laver used to do in his day,” Tsitsipas said.