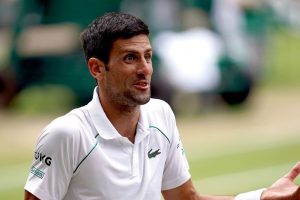 Former British number one Tim Henman has warned Novak Djokovic that the Serb is risking the remainder of his career and any further successes due to his firm stance against the vaccine.

The world number one was sensationally deported from Australia after confusion over his visa and exemption status reigned. Djokovic was detained soon after arriving in Melbourne in early January before he was released – and then detained for a second time when concerns regarding his previously awarded medical exemption became apparent.

After his final appeal was rejected out of hand, Djokovic was forced to return to Serbia, unable to pursue a 10th Australian Open title and defend his crown at the first Grand Slam of the year.

Henman believes it is up to each individual player – including the 20-time Grand Slam winner – whether they get vaccinated or not. However, the 47-year-old admitted travel restrictions for unvaccinated players could affect Djokovic’s career.

“I think, unfortunately, when you reflect on the Djokovic fiasco, it was a shambles really and I think it was very disappointing that it got to that stage of getting into Australia and then being in a quarantine hotel for four days, getting out and then finally being deported,” said Henman on Eurosport's coverage.

“There were no winners. It wasn’t good for Tennis Australia, I don’t think it reflected well on the government and obviously with Djokovic not being able to play in the Australian Open, it’s disappointing for the event and the fans and Djokovic himself, so fingers crossed we don’t have to witness something like that in the future.

“I think for me the question mark moving forward is: what does Djokovic do next? It would be very difficult for him to move forward with his professional career if he’s not double vaccinated – it would seem he is going to be very limited in the countries he can get into.

“I’m very interested to see what he does next and I would emphasise that it is absolutely his prerogative. Whether any individual wants to get vaccinated or not is his or her decision – but certainly as a tennis fan and seeing what Djokovic has been able to achieve on the court, I very much hope we see him back competing soon.”

Now, it appears the Serb will be allowed to play in France under new rules.

Per La Gazetta, France’s vaccine passport can be awarded to individuals who have recovered from Covid in the last six months – which means Djokovic will be able to enter the country even if he remains unvaccinated after he tested positive in mid-December.

The Serbian superstar won the French Open in 2021 – the second time he claimed the title after he won it for the first time in 2016 – when he defeated Stefanos Tsitsipas in the final. Djokovic defeated 13-time champion Rafael Nadal in the semi-final.