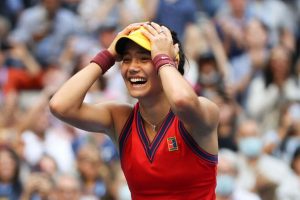 The Queen and Kate Middleton have both hailed Emma Raducanu's record breaking US Open victory this evening.

The Duchess of Cambridge called Emma's win over Canadian Leylah Fernandez as "historic".

She tweeted: "Huge congratulations @EmmaRaducanu on your stunning performances and historic Grand Slam victory! Incredible –we are all so proud of you. @leylahfernandez well done on your amazing achievements at this year’s #USOpen, it’s been a pleasure to watch. C"

Emma, just 18 years old, beat Fernandez in two sets at Flushing Meadows to crown a meteoric rise into the upper echelons of tennis.

The 150th-ranked Raducanu is the first qualifier to win one of the four majors and she also became the first British woman in 44 years to win a Grand Slam title.

The Queen said it was a "remarkable achievement at such a young age" and said she was an inspiration for future tennis players.

Raducanu beat Fernandez 6-4 6-3 in a battle of two unseeded teenagers to win the U.S. Open.

"I send my congratulations to you on your success in winning the United States Open Tennis Championships," said the monarch in a personal message on the Royal Family website.

"It is a remarkable achievement at such a young age, and is testament to your hard work and dedication. I have no doubt your outstanding performance, and that of your opponent Leylah Fernandez, will inspire the next generation of tennis players."

The Duchess of Cambridge is a big tennis fan and regularly attends Wimbledon while being patron of the All-England Lawn Tennis Club.

She tweeted her backing for Raducanu ahead of the final.

She wrote: “We will all be rooting for you tomorrow.”

“Wishing you the best of luck!"

Raducanu was the youngest British tennis player to reach the US Open final in the Open era and now has set a string of new records.

The teenager, who grew up in Bromley, did not even drop a set on the way to the triumph.

She is the first British woman to win a grand slam singles trophy since 1977, when Virginia Wade won Wimbledon. Then tennis fans will have to go further back to 1968 for the last time there was a British female winner at Flushing Meadows when Wade again lifted the trophy.

Emma is the youngest women's slam champion since Maria Sharapova at Wimbledon in 2004 and the first female to win the US Open without dropping a set since Serena Williams in 2014.

Victory now means she will take home £1.8million in prize money, move up to 23 in the world rankings and also become British number one.