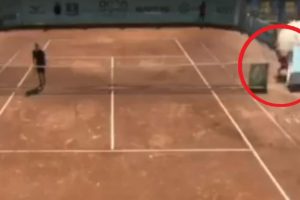 A young ball girl has narrowly avoided serious injury after an umpire’s chair collapsed during an ATP tennis match in Spain.

On Thursday (AEDT), Serbia’s Nikola Milojevic faced local star Eduard Esteve Lobato in a round of 16 clash at the Gran Canaria Challenger in Las Palmas.

Early in the second set, the chair umpire came down to identify a mark on the clay court, when heavy winds pushed over his chair.

Standing directly next to the umpire’s chair, a young ballgirl dived out the way just before she was crushed by the frame.

The umpires and players immediately rushed to her assistance, someone asking: “You OK?”

Someone queried: “Did it hit you?”

Esteve Lobato went on to claim a straight sets victory over the No. 3 seed, securing a 7-6 6-3 win.

The Spaniard will take on Italy’s Giulio Zeppieri in the quarter-final on Friday local time.

TSITSIPAS MARCHES ON IN ROTTERDAM

Stefanos Tsitsipas had to dig deep to edge out Poland’s Hubert Hurkacz in three sets to set up a quarter-final against Karen Khachanov in Rotterdam.

The Greek second seed dropped the second set but won a tight decider on his third match point, securing a 6-4 4-6 7-5 victory.

The 22-year-old, who beat Rafael Nadal en route to the Australian Open semi-finals last month, will face Russia’s Khachanov for a semi-final spot.

“I played really well. Both of us, we played a high level of tennis and didn’t give many break-point opportunities,” Tsitsipas said in an on-court interview.

“There were pretty good serves from both sides and I am really glad that I fought so hard towards the very end. It was exhausting, but it paid off.”

Tsitsipas, playing his first ATP Tour event since losing to Daniil Medvedev in the semis in Melbourne, clinched the opening set by breaking to love in the 10th game.

He was pushed all the way by the impressive Hurkacz, but despite squandering a match point in game 10 of the third set, he sealed a last-eight spot two games later.

The world No. 6 is the favourite for the title, after the early exits of top seed Medvedev and Alexander Zverev in the Netherlands.

Tsitsipas is on the charge.Source:Getty Images