Tennis: World No. 1 Barty caps year by getting engaged 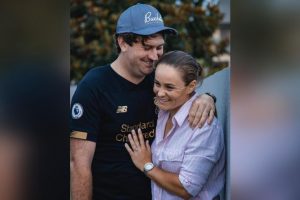 SYDNEY (AFP) – Ashleigh Barty capped her third straight season as world No. 1 on Tuesday (Nov 23) by announcing she is engaged to long-term boyfriend Garry Kissick.

The Australian revealed the happy news in an Instagram post, sharing a photo of the smiling couple embracing with an engagement ring on her finger.

“Future husband,” wrote Barty, 25, who accompanied the post with a love heart and ring emoji.

Kissick, 30, is a former golf pro and the pair met on a course in Barty’s home state of Queensland in 2016.

He is ever-present courtside when she plays and often posts supportive messages on social media.

Reigning Wimbledon champion Barty pulled out of the season-ending WTA Finals to remain at home and focus on preparing for the Australian summer.

She has not played since a shock third-round loss at the US Open in September, but still finished as world No. 1 after a season in which she won five titles.

Barty joined Steffi Graf, Martina Navratilova, Serena Williams and Chris Evert as the only women to finish as the top-ranked player for three consecutive years.