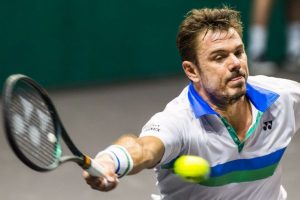 ROTTERDAM, NETHERLANDS (AFP) – Stan Wawrinka was knocked out of the Rotterdam ATP meeting in the first round on Tuesday (March 2) after being seen off in straight sets 6-4, 7-5 by Russia’s Karen Khachanov.

The three-time Grand Slam winner, playing in his first ATP match since losing a five-set epic to Marton Fucsovics at the Australian Open, was put away by world number 21 Khachanov in a fairly comfortable fashion.

Big-hitter Khachanov eased through the match without dropping a service game to eighth seed Wawrinka.

The 24-year-old will face British qualifier Cameron Norrie in the last 16.

Khachanov’s countryman and fourth seed Andrey Rublev strolled into the next round thanks to a 7-6 (8/1), 6-3 win over American qualifier Marcos Giron.

Later on Tuesday world number six Stefanos Tsitsipas takes on Egor Gerasimov in his first match since falling at the semi-final stage of the Australian Open to Rotterdam top seed Daniil Medvedev.