Home » Tennis » Tennis: US Open champion Thiem out of Wimbledon with wrist injury 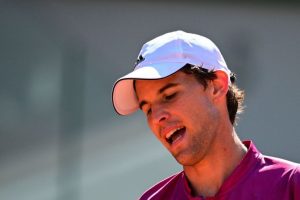 “I’m really sorry for pulling out of the upcoming three tournaments I had in my calendar – Wimbledon, Hamburg and Gstaad,” the 27-year-old Austrian wrote on Twitter.

“I am determined to come back stronger.”

Thiem is the second top 10 player to pull out of Wimbledon after two-time champion Rafael Nadal said he was sitting out the tournament to rest after his French Open semi-final exit.

Wimbledon, which was cancelled last year due to the pandemic, starts at the All England Club on Monday.

Thiem has endured a tough season and has already said he will skip the Tokyo Olympics to concentrate on defending his US Open title.

He was knocked out of the French Open in the first round despite being a two-time runner-up in Paris and then had to retire from his opening match in the Mallorca grass court event on Tuesday against France’s Adrian Mannarino.

After consulting doctors in Barcelona, Thiem said he will have to wear a splint on his right wrist for the next five weeks.

“I will do everything the doctors say in order to recover as quickly as possible.” Thiem has never got past the last 16 at Wimbledon and made first round exits on his last two visits.