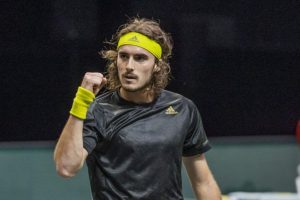 ROTTERDAM, NETHERLANDS (AFP) – Stefanos Tsitsipas, a semi-finalist at last month’s Australian Open, reached the final four of the ATP Rotterdam tournament on Friday (March 5) with a 6-4, 3-6, 7-5 victory over Karen Khachanov.

World number six Tsitsipas fought back from 3-1 down in the final set and broke his Russian opponent at five games each before sealing a place in the semi-finals.

The second-seeded Greek will play either fourth seed Andrey Rublev of Russia or Frenchman Jeremy Chardy for a spot in Sunday’s final.

Tsitsipas beat Rafael Nadal en route to the Australian Open semi-finals before losing to Daniil Medvedev, who crashed out in the opening round in Rotterdam as top seed.