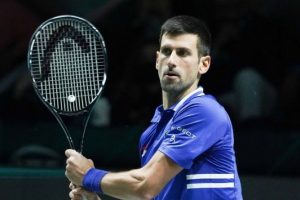 A tennis official who used the same exemption as Novak Djokovic has now voluntarily left Australia. The world number one took to social media earlier this week to state he was on his way to compete at the Australian Open after being granted a medical exemption.

However, any optimism was soon vanquished when the tennis legend had his visa cancelled by Australian Border Force.

Now he is on the verge of being deported, but with his team due to appeal the decision, the Serbian will not hear his fate until Monday.

Until then, Djokovic will be held at the quarantine Park hotel in Carlton, Melbourne, and was seen being transported there in a silver Volkswagen van.

Now it has emerged that a European tennis official, who entered Australia using the same exemption has voluntarily left the country, Australian Border Force (ABF) confirmed on Friday night.

However, that has yet to be formally confirmed by the federal government.

An ABF spokesperson stated: “All travellers who enter Australia must do so in accordance with our strict laws and entry requirements, regardless of their status or their reasons for entering the country.

“The ABF employ a multi-layered approach … this includes avenues to investigate, locate and detain non-citizens who have been found, after their arrival into Australia, to have breached our border entry requirements.”

Czech tennis player Renata Voráčová, who was also granted the same exemption as the 20-time grand slam champion, has been deported after the ABF cancelled her visa.

Unlike Djokovic, the 38-year-old had already played a match in Australia, as she featured alongside Katarzyna Piter, 30, in a doubles match in the Gippsland Trophy on Wednesday.

She is believed to have entered Australia last month with a vaccine exemption granted by Tennis Australia because she had recently contracted and recovered from COVID-19.

However, like the tennis legend, she was told her visa was cancelled for failing to meet the federal government’s requirement that all incoming non-citizens be vaccinated against the virus.

She was held in the same hotel as the Serbian, before she flew out of Melbourne on a flight to Dubai on Saturday night local time.

It was revealed earlier today that Djokovic contracted coronavirus for a second time on December 16, but has now recovered.

The tennis star’s younger brother Djordje has provided an update on the world number one while he’s being detained in Australia. The 26-year-old has said the tennis star is keen to see “justice served” and wants the “truth revealed.”

“What’s left is to await the court decision. I don’t know what he’ll do if the decision doesn’t go his way, and he doesn’t know either,” he said.

“He is full of emotions, and tennis and the grand slam are currently the last things on his mind.

“The only thing he wants is to see justice served and the truth revealed.”