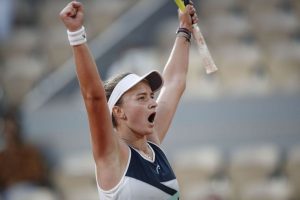 The world number 33 struggled with nerves throughout but eventually proved more consistent than Sakkari, who got tight when she served for the match at 5-4 in the third set.

Krejcikova will face Russian 31st seed Anastasia Pavlyuchenkova, who will also be making her maiden appearance in a major singles final, on Saturday.

She will be looking to emulate fellow Czech Hana Mandlikova, who won the title at Roland Garros in 1981.

“When I was young, a junior, I wanted to play matches like this, such challenging matches. We both had our chances,” said Krejcikova.

“Even if I had lost today I would have been proud of myself. I was just fighting, that’s the most important.”

With both Sakkari and Krejcikova playing in their first Grand Slam semi-final, the match got off to a shaky start.

Sakkari was the first to hold serve on a sunbaked court Philippe Chatrier to open a 3-1 lead but her advantage was shortlived.

Krejcikova, who came into the semi-final on a 10-match winning streak after claiming the title in Strasbourg last month, rallied back as Sakkari lost her way in the sixth game.

Krejcikova then broke for 5-3 with a superb lob as she retrieved a drop shot, but dropped serve straight after with a double fault on game point.

She sealed the opening set with yet another break, however, when Sakkari’s crosscourt forehand went wide after clipping the net cord.

Sakkari raced to a 4-0 lead in the second set but Krejcikova cancelled out one of the two breaks of serve to narrow the deficit to 3-4, only for the Greek to serve it out, letting out a huge scream out as she sent the contest into a decider.

Krejcikova saved a match point on her serve at 3-5, forcing Sakkari to serve for the match.

The Greek fell 0-30 behind after two unforced errors before saving a break point with a sizzling crosscourt backhand winner.

She was broken, however, when she sent a backhand into the net to allow Krejcikova to level for 5-5.

Serving at 6-7, Sakkari saved three match points. Krejcikova thought she had it in the bag on her fourth match point at 7-8 when Sakkari’s forehand was called long, only for the chair umpire to rule it was in.

On the fifth, however, Krejcikova ended the contest with a backhand winner after three hours and 18 minutes.